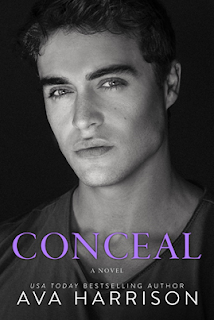 Conceal is the latest novel in the unnamed series featuring the Price siblings, and this new book is about none other than twenty-eight-year-old Jaxson, the youngest after eldest brother Grayson (Entice) and older sister Addison (Deceit). Both his siblings have found their happily-ever-afters, but Jax isn't really searching for it. And then he meets a woman named Willow. She's twenty-six and she's got secrets, not even willing to share her last name. What Jax doesn't know is that she's on the run or why she's in hiding. Willow needs to stay one step ahead and keep her head down if she has any hope of getting out of this with her life. There's no way she would ever even underestimate what the man who's after her is capable of doing. Jax could very well provide her with the help that she needs, but she isn't sure if she's capable of giving him her heart in exchange of it. Not if she wants to keep both of them safe. However, Jax isn't a man to be trifled with, not when he's prepared to take down Willow's demons.

Ava Harrison gives the misunderstood Price sibling his own shot at happiness with this newest standalone in her unnamed series, and Jax truly was the shining star throughout the entire book. I liked seeing this broken man begin to heal and find his place within his family, with Willow, and with himself. Willow was a pretty good heroine, and seeing her discover her own strength was commendable. I must say, however, that it took what felt like forever to get to the reason why she was on the run in the first place. I don't need things to be revealed from the get-go, but it was far slower a reveal than even I would have expected. This series has gotten better with each book that's been published. The romance was okay, but the suspense element was a smidgen better. Conceal snags 3.5 stars. ♥