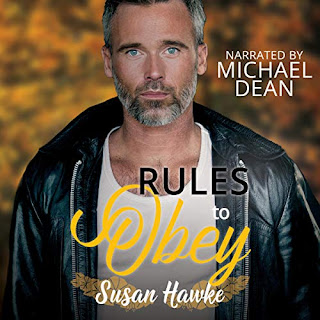 Ah, there's nothing quite as satisfying as listening to an audiobook that matches an author's writing and a narrator's voice-over perfectly. Such is the case whenever it comes to Susan Hawke and Michael Dean. I've loved reading all of Hawke's eBooks, and she's rightly entrusted said books to Dean, as proven by the fact that he's narrated both of Hawke's currently available audiobook series, Lovestrong and Davey's Rules, doing so under the name "Michael Pauley". And with the eleventh audiobook that's paired them together, all I can say is "the more, the merrier!" So yeah, I've got my fingers crossed that these two have many more audiobooks to share with addicted listeners--like me!--everywhere.

Rules to Obey is the fifth audiobook in the series--the fourth full-length one since the one before it was more novella in length--and it's a May-December story about forty-two-year-old furniture maker Marcus Alves and twenty-two-year-old Daddy's Lap server Jeffrey Robustelli. Marcus has been biding his time with Jeff, recognizing that the younger man was shy and unsure but also holding out hope that he was the little Marcus had been waiting for. When Jeff's past comes barging into the safe and steady life he's created for himself, Unexpected help comes in the form of Marcus, but will a fake relationship help Jeff finally be free of his past or will Jeff end up wanting to be tied to a real future with Marcus?

I may have not been on Team Marcus going into this book because of the impression he left me with in Rules to Break, but the man won me over, all thanks to his absolute adoration of Jeff! I loved these two together because they truly had to work towards a more trusting place in their relationship. I wouldn't say that Marcus handled Jeff with kid gloves, but he was gentle and patient and nudged rather than pushed. I also liked getting to know Jeff a whole lot better here, especially since he's been a part of the series from the very beginning. The usual suspects are also present and accounted for, making for an even better read. Rules to Obey gets five stars, and I can't wait to read the final (sob!) Davey's Rules story, which is about Davey! ♥

Purchase Rules to Obey on Audible.