Review: Herd That by Lani Lynn Vale (The Valentine Boys #1) 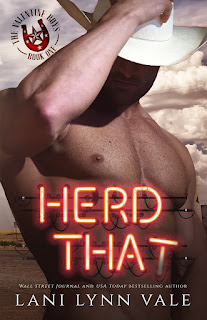 Beginning with this series, I've made it a policy to no longer read the blurbs to any of Lani Lynn Vale's books. I'm still going to read them; I just don't want to read one thing that's written in the blurb and then find out while reading the book that the blurb was far-off. I've enjoyed almost all of Vale's books that I've read so far. Her stories tend to be a bit off-the-wall and has a heavy dose of humor mixed with suspense to them, and experience has shown that her series are interconnected to some degree. She kicks off her new Valentine Boys series with the four brothers of Georgia Pena née Valentine (wife to Nicolas Pena, Double Tap, book two of Code 11 KPD SWAT). My bit of advice? Read Georgia's book before diving into this new series starter. There is some very heavy family history when it comes to the Valentines, and while it is mentioned in this first book about the remaining siblings, it takes a several chapters to get to that point and it's more of bits and pieces rather than a more detailed explanation of what went down with the family. Quite a few new readers have felt a wee bit lost, so spare yourself the confusion.

Herd That is the first book in the Valentine Boys series, and it's focused on Ace Valentine, the eldest among the brothers--but not among all the living siblings (yeah, I said "living", but I won't say why, which means you'll have to read the book to satisfy your curiosity)--and the guy in charge of all things on the family ranch. He's paired with Codie Spears, a woman who believes that the bad reputation she had as a child and teenager as all people see even after all these years. Their ranches happen to butt up next to each other, and while both Ace and Codie have been away from their hometown of Kilgore, Texas, they're now back. She makes it clear that dating isn't a good idea, not when she doesn't think she's deserving of someone like him, but Ace has made up his mind and plans on taking on the challenge that is Codie. With such dark pasts, could Ace and Codie forge a brighter future together?

The story of two people trying to find their footing in the hometown they'd left behind and with each other was good, but if I'm being perfectly honest, there were A LOT of inconsistencies and things that simply didn't jibe. Take for example Codie being surprised that Ace wasn't some old man when she meets him at some cattle buying and selling event. How could she not know that he was just a couple or so years older than him when they were from the same darn town and the tragedy that was Ace's family history was not exactly a secret? Then there was the whole thing about being from different schools but comments made from different people made it seem as if they all went to the same school. I was also confused over Codie's last name being Spears, yet her father is Japanese and her maternal grandfather is Jacob Spears. Why isn't she using her father's last name? There were other things as well, but to be fair, though, there's something about her stories that still has me eager to read whatever she releases. While I've enjoyed a lot of her other books, Herd That simply was not my favorite, and it gets three stars. ♥