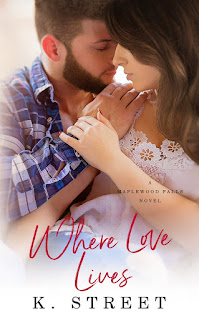 Where Love Lives is the second novel in the Maplewood Falls series from K. Street, and it's a second-chance, slow burn romance about Easton Chadwick, older brother to Saylor Ferraro and best friend to Jase Turner (Where Forever Ends, book two of Maplewood Falls), and Molly Davenport. If there's one thing that Molly knows well, it's that people leave. It's an inevitability that she's grown accustomed to, so when her relationship with Easton feels like it's about to go up to the next level, she runs. After all, it's better to be the one who leaves then to be the one who gets left behind. She breaks his heart in the process, but even his broken heart can't help but be a bit hopeful when Easton bumps into Molly a few months later and they end up sleeping together. Except Molly doesn't return his feelings, forcing Easton to accept the fact that she doesn't love him the way he loves her. He swears to never have anything to do with her again. Several months pass, and when Molly repeatedly tries to reach out, Easton rebuffs her efforts. But when her best friend calls, he goes to Molly and ends up rather shocked by what he learns.

I'll be honest, I didn't really like Molly a whole lot in the first quarter or so of the book. She really did treat Easton quite badly, and the poor guy was nothing bu shattered by her rejection of his love. But then I got to know her better, and when she peeled back the layers and allowed Easton to see who she truly was and revealed all her hurt, it was easier to understand why she was the way she was. Does it excuse her? No, but I did have more empathy for her and her situation. I think one of my favorite things about the story was that it didn't over-simplify the resolution of all the pending issues between Easton and Molly. It take time and concerted effort on both their parts for them to regain their footing and begin to trust again. I also appreciated the reminder that love isn't always enough, that trust does play a huge part in what makes a relationship work. I adored the supporting cast of characters, with special mention going to Paige, Molly's best friend, who I hope we haven't seen the last of! Two books in and I'm already so enamored with the Maplewood Falls series. Where Love Lives easily receives five stars. ♥

Read my reviews for the Maplewood Falls series:

Purchase Where Love Lives on Amazon.