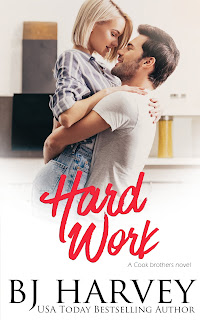 I've been addicted to this series from the beginning, and I can't believe we're now on the second to the last book! Gah! Hard Work is the fourth novel in the Cook Brothers series, and Cohen Patrick Cook--yep, totally full named him--is officially the last among the Cook siblings to find his happily-ever-after. His older brothers' stories can be found in the first three books while his older sister's romance is Game Saver, the third book in the Game series, which I have yet to read. There's one more book slated for a May release, which will be about Ezra Baker, Jamie Cook's best friend and the guys' brother from another mother (and father!), literally. But more on that when book five is released in a few months. For now, the spotlight is on Cohen and his work wife and closest friend, Skye Rossi.

Twenty-nine-year-old Cohen Cook and twenty-six-year-old Skye Rossi are pretty much the perfect pair. They work fabulously well together, they're the best of friends, and they're welcome by each other's families. Everyone--well, not including Skye's three brothers--thinks they've got crazy chemistry and may be meant to be. Except they're "just" friends. Really. Friends who are totally attracted to one another and have been since they met the year before. Lately, they've gotten flirty and the temptation they never acknowledge has become difficult to resist. So, they give in but make it clear that they will remain friends who just happen to have sex. No harm, no foul. No falling in love. Because they're friends. Only friends...who happen to share awesome orgasms. It's all good. Right?

BJ Harvey's created her own niche in the romance genre with this house flipping series of hers, one which I very much adore and continue to be so darn eager over. Cohen and Skye--aka Cass (for Casanova) and Brat--have the sort of relationship that's perfect for the friends-to-lovers trope. Even with the attraction, they chose to put their friendship and work partnership first, and even after they decided to go with the whole friends with benefits thing, the platonic and professional aspects of their relationship mattered more because they feared anything more would complicate everything. This was a fun book, albeit a frustrating one as well thanks to the stubbornness of these two. Hard Work gets 4.5 stars, and it has me excited for Ezra's book and hopeful for a Rossi siblings spin-off! ♥