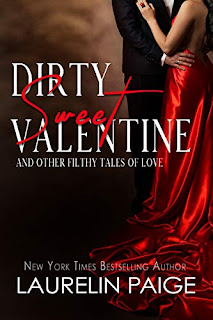 Dirty Filthy Valentine is the first story and has Donovan Kincaid and Sabrina Lind from the author's Dirty duet. It's Valentine's Day and seeing the other people at work receiving deliveries from their significant others shouldn't be filling Sabrina with envy. After all, she knows Donovan loves her, and he's taught her so much about herself and how she shouldn't be ashamed of her wants and needs. What I liked best about this story was that while Donovan isn't your typical romantic, he proves he knows Sabrina notably well and shows his love in the way he knows best.

Filthy Valentine Fix is story number two and brings readers back to The Open Door, an exclusive kink club. This story features Patricia and Nate. For all intents and purposes, these two are, simply put, neighbors with benefits. However, it's been feeling far more than that as of late, although neither of them has actually slapped a label on what they do have. But maybe Tricia wants the label; maybe she wants to hear those three words and say them in return. Neither one knows what will happen next until one of them steps up and actually says it. You never know...

Dirty Sweet Valentine is the third story, and it's my favorite one among the four shorts. Amelia is not a fan of Valentine's and she's not expecting any sort of Valentine-themed present from anyone. But she gets the shock of her life when she finds Harrington--her Harry--standing on her doorstep. Except she can't really call him hers, not when they've never made any sort of promises over the past decade and a half. This story was hot but gah, it was also heartrending. It does have a modicum of hope, so fingers crossed we haven't seen the last of Amy and Harry.

Cherry Popper is the fourth and final one in the collection and it's got the lightest feel among all the stories. Kira Larson is a member of a sorority whose members have made a vow to hold on to their virginity. Chase Matthews, however, happens to know one particular pertinent fact about her that could wreak havoc on Kira's future plans. Out of the four short stories, this one felt out of place. After all, the first three shared common ties, and while this last story was pretty good, I did have the whole "One of These Things" song from Sesame Street going in my head. ♥