Review: Haskell Himself by Gary Seigel 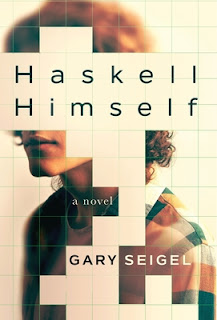 There's a saying that goes "You never forget your first," and it pretty much holds true, whether that experience is a positive or not-so-positive one. When it comes to that first read I have from an author, especially when it happens to be their debut release, and it turns out to be an extraordinary one? Then it becomes a distinct privilege because it's like I'm bearing witness to an author's introduction to readers at large and experiencing their first efforts in  publishing. This was exactly the case for Haskell Himself, Gary Seigel's initial foray into the world of young adult (YA) fiction. Seigel published a self-help book about a dozen or so years ago, but this is him switching from non-fiction to fiction and I, for one, appreciate that switch because his debut release was both impressive and inspiring.

Haskell Hodge is sixteen but his life at the moment isn't particularly sweet. Sure, he's made somewhat of a name for himself as a child actor with a cereal commercial as his most well-known work, but that doesn't save him from getting bullied after having no choice but to stay with his aunt in Los Angeles. To make matters worse, he's beginning to question his sexuality, and there's absolutely no way he can go exploring that either. The last thing he needs is to give the bullies another reason to come after him. It may be the 1960s and the sexual revolution may be welcoming all comers, but Haskell will gladly remain on the sidelines in order to not bring more attention to himself. Then an outlet for all pent-up emotions comes along, but will Haskell lose himself or learn to love himself?

Allow me to get this out of the way: READ THIS BOOK! Now, let me tell you why. Gary Seigel has penned a novel that may have been set in 1966, but the very heart of Haskell's story resonates even in today's society, and that's the sheer genius of what Seigel has created. I'm a woman in my forties, yet I'm not only able to empathize with young Haskell and the ups and downs of his life, but I can relate to them because there were certain parts of it that remind me of not just my own teen years but even beyond that. The author's writing is notable in all the best ways possible, which has me hopeful that this is "merely" an inkling of what he has to offer. I'm appreciative to have had the opportunity to see New York and Los Angeles in the 60s through Haskell's eyes and how far he came. Five stars. ♥

Purchase Haskell Himself on Amazon.