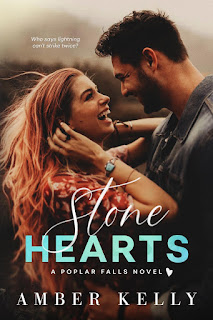 Stone Hearts is the second novel in Amber Kelly's Poplar Falls small-town romance series, and the focus this time around is on thirty-two-year-old Dallas Stovall (née Henderson), best friend to Sophia Lancaster (Rustic Hearts, Poplar Falls book one), and thirty-four-year-old Myer Wilson, best friend to Payne Henderson, Dallas's older brother. The Hendersons and Wilsons have been neighbors for years, and while Payne and Myer are the ones who lay claim over the title of "best friends", Dallas counts Myer as one of her close friends as wll, trusting him with the most precious thing in her life--her six-year-old son, Beau. After everything that went down at the end of her marriage to her ex-husband, Dallas simply wants to concentrate on giving Beau the best life possible and believes love is no longer in the cards for her. But she has no clue that Myer has had feelings for her for years, and while he may have been patiently waiting for her all this time, he's done doing so. Once Dallas begins to see in a whole new--and not-so-platonic--light, Myer feels this is his opening, but will Dallas's bad past close all chances at a new love?

With each new book she releases, Amber Kelly impresses more and more. I really enjoyed this second installment in her Poplar Falls series, and the fact that she's got a myriad of other interesting characters still waiting to get their own happily-ever-afters has me excited because that means there'll be more to come. The story is told from the dual points-of-view of Dallas and Myer, although more the former and the latter. These two had an honest-to-goodness friendship, which I loved. Although Myer did have feelings for her, it wasn't like he was pining forever for this one woman. They led their own lives prior to both of them finding their way back to their hometown. The development of their relationship from friends to more felt organic, and seeing how Myer and Beau already had an established relationship based on genuine affection, trust, respect, and love. The mystery suspense aspect of the story was pretty good, although it was clear what was going on and who was behind it, plus I may have ranted more than once that Dallas should've listened to her gut. Overall, I quite liked Stone Hearts, which snags 4.5 stars. ♥

Read my reviews for the Poplar Falls series: