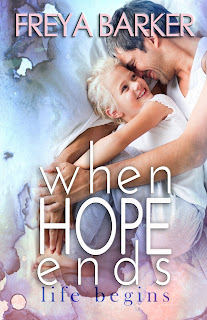 Originally published as part of a multi-authored anthology entitled Then There Was You, Freya Barker's When Hope Ends (Life Begins) has just been re-released on its own. This is the story of a single mother named Mika Spencer, a single father named Jude Parks, and how one decision changes the course of their respective lives and leaves them linked in ways so rare yet ultimately awe-inspiring. Fair warning: You may require a fair number of tissues on-hand.

I've spent a couple of days trying to figure out how to write this review without giving much of anything away because I honestly don't want to spoil the book for anyone. You'll get what's going on a couple of pages into the prologue, and from there, I knew I was in for a heck of a heartrending read. Mika's thirteen-year-old son, Jamie, and Jude's nine-year-old daughter, Kelty, are the loves of their lives and do play integral roles in their parents' story.

Freya Barker is an author whose work has enticed me in the past, but this newest book of hers is exceptional. It has a wholly different feel compared to her previous releases. Yes, it's heartrending, but it's brimming with hope, and the reminder of how a single act can be life-changing in the best or worst of ways. From devastation, we not only learn to survive, but we can truly begin to thrive like Mika and Jude. Five stars go to When Hope Ends (Life Begins). ♥