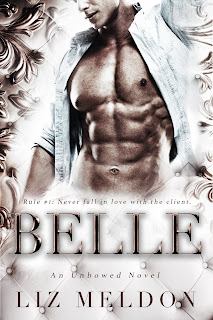 Note: A review was provided by the author via Enticing Journey Book Promotions.

Belle is my first read from new-to-me author Liz Meldon, and it also happens to be the first book in her Unbowed series. As I understand it, this was originally released as a duet a year and a half ago, but since I never read the story till now, I have no idea if there were any changes made. So, this review focuses on this new release alone, and it was certainly one heck of an introduction, both to Meldon's writing and to this enticing story she's created.

Belle Bennet is an escort eager to explore her submissive nature, and Dean Donahue is a billionaire and a Dominant bent on putting this new sub through her paces. Two months on one private island with one sub-in-training and her Dom. Except Dean all of this is temporary and by the end of their time together, Belle can't really call Dean "her" Dom. They both have their sets of rules in this paid-for arrangement. It was never meant for more.