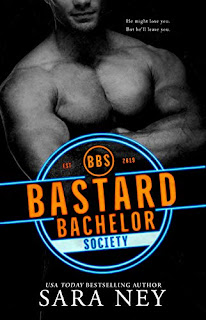 Sara Ney's kicks off her new series, The Bachelors Club, with a hilarious romantic comedy, Bastard Bachelor Society. At twenty-six, Brooks Bennett is living the life. He's just been promoted at the architectural firm he's only been working at for a year, and is working on the project he's been eager to get his hands on. He's single and is more than happy to mingle, with no plans of settling down anytime soon...or ever. Creating a secret society dedicated to celebrating their singlehood with his two best friends simply highlighted how dedicated they were to NOT being tied down to any woman. So of course fate was going to interfere and mess with his plans by throwing twenty-four-year-old Abbott Margolis his way. She's gorgeous and intelligent and knows how to don a pencil-cut skirt like a boss. Even having an evil cat doesn't diminish her awesomeness. But Brooks made a bet, and it's one he intends to win. He's going to be the last man standing--the last man in their secret club, erm, society to remain single. But fate and Abbott's meddlesome matchmaker of a Nan seem intent on causing Brooks to fall...in love with Abbott.

There was a lot of humor in this series starter, and it also happened to have a healthy dose of romance as well, particularly when it came to the underlying attraction that was between Brooks and Abbott even as they were bonding and forging an honest-to-goodness friendship with each other. You pretty much know that Brooks and his buddies are bound to fail with this whole secret society they've created because love is going to swoop in just when they've decided they're never settling down. Brooks and Abbott's story was a pretty good beginning to this new series. It was entertaining and elicited quite a few laughs, particularly when Brooks, Phillip, and Blaine were together. Truth be told, though, this wasn't my favorite Sara Ney book; however, I liked what I found between the proverbial covers, and I'm certainly looking forward to reading book two. Four stars for Bastard Bachelor Society. ♥