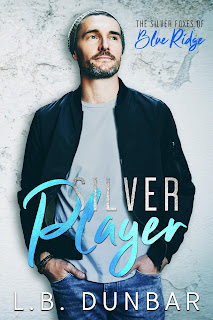 L.B. Dunbar is the author I automatically go to when it comes to age representation in my romances. I'm not ageist when it comes to the books I read; as long as my interest is there, it's a go (and that goes for both fiction and non-fiction). But I do get a kick out of romance reads that involve main characters who happen to be in the same age group as I am, and Dunbar's over-forty romances tickle my fancy quite nicely, thank you very much. Her latest release is Silver Player and it's the second novel in her Silver Foxes of Blue Ridge series. This features forty-six-year-old William Harrington, co-owner of the family-owned microbrewery and pub Giant Brewing Company, and forty-one-year-old Roxanne McAllister, owner of independent bookstore BookEnds. When a sixteen-year-old named Sadie McAllister shows up out of nowhere and informs Billy that he just happens to be her father, his world as he knows has tilted and looks like it'll never be righted again. He has NO clue how to raise a child, what more a teenager, and the only one who can help Billy is Sadie's aunt, who just happens to be his nemesis--Roxie McAllister.

This book made me laugh my not-so-tiny behind off. Billy and Roxie were a hoot, and their confrontations, erm, exchanges make for prime entertainment. These two had their respective insecurities and issues to deal with, and who would have thought that they would find that partner best suited for them in the one person they never really considered? But even with the laughs, there were those moments that made my heart squeeze in my chest, particularly when it came to coming to terms with their new normal. Sadie was such a game changer, and she turned out to be a linchpin of sorts but in the best way possible. These guys had their struggles and their misunderstandings, but at the end of it all, they fought their way to a much deserved happily-ever-after and realized that they were so much better at the parenting thing than they once thought. L.B. Dunbar has rarely disappointed me whenever I read her books, and she's certainly left me excited to see what else awaits readers like me as the Silver Foxes of Blue Ridge moves on to the next two books. I'm handing Silver Player five out of five stars. ♥

Read my reviews for the Silver Foxes of Blue Ridge series: