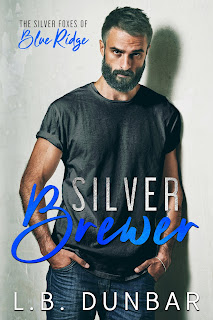 L.B. Dunbar is back with her over-40 romances and it's a series starter to boot! Silver Brewer is the first in Dunbar's Silver Foxes of Blue Ridge series featuring the four Harrington brothers, a spin-off of her Sexy Silver Foxes series, particularly the fourth book, Second Chance--which is where the Harrington's sister, Mati, finds her own happily-ever-after. However, you don't necessarily need to read that series or book four in order to fully enjoy this new first in a series. Here we have the eldest Harrington, forty-nine-year-old George the Second, nicknamed "Giant" and CEO of Giant Brewing Company. When a woman dressed more for a business meeting in an air-conditioned boardroom shows up on his property, Giant's hackles immediately go up...as does his curiosity. Forty-year-old Olivet Pierson declares the real estate company she works for wants to buy his land, and while Letty tells the hottie lumbersexual to name his price, it becomes clear he won't sell. That doesn't stop Giant from challenging her to three nights of roughing it outdoors. By the end of it, will Letty not only lose the realty deal but her heart as well?

It honestly isn't all that difficult to fall in love with L.B. Dunbar's stories, and not just because the main characters of the books that I have read from her so far all happen to be in my age group--aka the over-40 club. While it did take Giant's outdoors challenge for me to warm up to Letty, I must admit that I loved getting to know the version of her that went beyond the woman who was desperate to seal the deal--the land deal, you dirty minded people!--and found her to be someone who had dreams that went beyond making money. Giant was a really great guy, and while his back story was rather sad, what with him being a widower and his daughters being grown, leaving him with an empty nest, it was obvious that he was someone who deserved a chance at finding love and commitment once again. Dunbar took the story in a direction that was both interesting and creative, which was far better than doing the usual fall-in-love-then-encounter-complications-then-end-up-happily-ever-after song and dance. Silver Brewer was both a well-written romance on its own and an enticing series starter, which is why it receives 4.5 stars. ♥