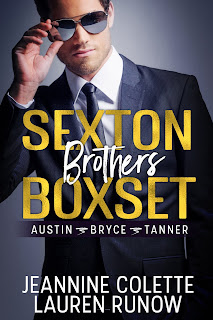 Jeannine Colette and Lauren Runow have boxed together their Sexton Brothers trilogy for a convenient set--and it's currently available for a mere 99 cents (US dollars), making it convenient AND cheap!--and it features, obviously, three brothers, Bryce, Austin, and Tanner. The Sextons belonged to a wealthy family who made its money in media. Bryce, the oldest, is the mogul among the three; Austin, the middle child, is the racer; and Tanner, the youngest, is the artist. All three are considered "catches" but it isn't until they meet the women for them that they truly experience what it's like to fall in love and have their world tilted on its axis. Getting to their respective happily-ever-afters isn't all that simple nor easy, but they've truly met their matches with each of the women they fall for.

Austin is the first book, and it's about middle child Austin Sexton. He's a war hero who's dealing with everything he's seen and experienced while deployed by drowning himself in vices, with racing at the very top. Under the moniker of "Falcon", Austin isn't known as being a member of one of San Francisco's most prominent families but as someone who burns rubber and crosses the finish line first. When he meets Jalynn Smith, there's a whole lot of tension, and it was supposed to be just one night. But then it turns out that Austin's brother is her new boss, so their paths cross time and again. These two try to resist the pull, but the more she sees who Austin really is on the inside, the harder Jalynn falls for him. I quite enjoyed their story and it was a thrilling start to the trilogy. Five stars.

Bryce is the second book, and the spotlight is now on the eldest among the brothers, Bryce Sexton. He's got a reputation for being cold-hearted, with no time for things like love and relationships, choosing instead to focus all his attention towards work. However, when he meets Tessa Clarke, he finds himself distracted and shifts that focus her way. She's a single mother to her son, Charlie, and she's got a strong sense of independence, refusing to let's life's challenges bring her down. There's no way someone like Bryce would have the time to pursue her, but pursue her he does. These two seemed like such opposites, but I loved seeing how they found their middle ground. This was a story about true love and family, and I had all the darn feels for Bryce and Tessa's romance. It gets five stars.

Tanner is the third and final book, and we finally get to the youngest, Tanner Sexton. His life in New York is coming to an end, what with graduation on the horizon, but before it does, Tanner unwittingly rescues Harper Doyle by kissing her in full view of her ex. Their lives are headed in different directions--Harper as a fifth grade teacher and Tanner to the legacy that awaits him in San Francisco. Harper knows feeling what she feels for Tanner may be a risk, but he's worth it. There's a whole lot that needs to be dealt with as far as Tanner and his brothers and what's happening with their media empire is concerned, so my anticipation for this book was at a high. Just like those before it, I loved reading Tanner and Harper's story, which gets five stars. The bonus material was quite fab as well! ♥