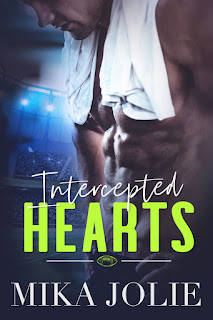 Intercepted Hearts is the new release from Mika Jolie, and it's the first in her Playing for Keeps series. Ever since I discovered her writing last year--having read two from her back list and her two 2019 releases--Jolie has easily become an auto-read author. Intercepted Hearts may be a quick read, but it never felt like one, if that makes sense. It was packed full of a strong story and main characters. We're introduced to Hudson Baldwin and Natalie Harris. He's the twenty-three-year-old superstar quarterback nicknamed the King of New York, and she's a twenty-two-year-old bartender and substitute cheerleader. When Hudson notices Natalie practicing with the other cheerleaders, he knows immediately that he wants to get to know her better. He's shocked, however, by the fact that she's not as receptive to his interest as he'd expected. What'll it take for Hudson to intercept Natalie's heart?

This was an easy read with a smidgen of angst amidst a heartwarming story. Kudos to Mika Jolie for not making Hudson into the typical cocky star athlete who thinks he's God's gift to the sport he's playing. Yes, Hudson is gifted, and yes, he knows it, but there's a humility to him that isn't as common as I'd hoped in the sports romance genre. He's understanding and patient with Natalie who has her priorities firmly in place, and she's definitely someone I take my hat off to because of the love she has for her father and younger sister.  Hudson's own family was also quite notable, particularly his twin brother, River, whose story gets told in the next book in the Playing for Keeps series. I'm also curious about their sister, Brooklyn, but then this is me hoping that the series isn't going to be limited to "just" two books. Fingers crossed! Intercepted Hearts was a fun start to this new series. It gets 4.5 stars. ♥