Review: This Is Forever by Natasha Madison (This Is #4) 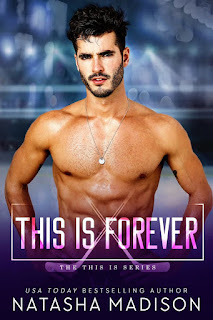 “You really are that perfect person,” I say, leaning down to kiss his lips.

Natasha Madison's fourth and final book in her This Is series? This. Was. Everything! Did you like that play on words in honor of the series? I liked the author's Something So series, but this spin-off was pretty damn addictive, so saying goodbye is definitely bittersweet. This Is Forever is the story of twenty-four-year-old Justin Stone, star player for Edmonton, and twenty-six-year-old Caroline (whose last name I'm unsure of because I'm pretty sure she was no longer using that of her ex-husband's), a single mother working two jobs. When Caroline's eight-year-old son, Dylan, is signed up to attend the Justin Stone Summer Hockey Camp, Justin is instantly taken by the young boy with true skating talent, but he's also drawn to the boy's beautiful but cautious mother. He knows she's wary about his intentions and worried about two times a broken heart, but Justin is ready to show Caroline and Dylan--as well as his own family and those who may have their doubts--that he's absolutely all in, because for him, this is forever.

I love that this series is closing out with the lone Stone--well, at least of his generation--who has yet to settle down! I confess that I have a thing for single parent romances, not particularly caring if it's a single mother or father, because there's more than two people involved in the relationship (not counting polyamorous relationships, but that's a whole different deal) and the other person needs to win over both the adult parent and the child or children. Justin was absolutely awesome with both Caroline and Dylan, and he obviously is his father's son and his brother's brother. He had the whole protective alpha male thing going on--but not as caveman-like as Matthew--but I admit that inasmuch as I loved seeing him fall in love and finding his person in Caroline, it's his relationship with Dylan that had my heart thump happily. There are two particular scenes in the book--both of which are in the second epilogue--that made me teary-eyed in the best ways possible. I know this is the end of the This Is series, but dare I hope that we will have another spin-off for the next generation?! Go read This Is Forever! Five-plus stars. ♥

Read my reviews for the This Is series:

This Is Crazy (book one) - five stars - My Review

This Is Wild (book two) - five stars - My Review

This Is Love (book three) - five-plus stars - My Review

This Is Forever (book four) - five stars - My Review (posted above)

Purchase This Is Forever on Amazon | Apple Books | B&N | Kobo.