Review: This Is Crazy by Natasha Madison (This Is #1) 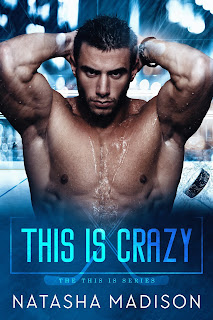 Oh my... This book SO didn't go in the direction I thought it would, but you went hear me complaining because I sure as hell liked where Natasha Madison took me on this ride. This Is Crazy is the first novel in Madison's brand-new This Is series, which is a spin-off of her Something So series. I've only read the series starter of the latter--although I do have the box set sitting prettily waiting for me on my tablet and I'll be reading that while waiting for book two in this spin-off--so I can say that you may read this new book without having read any of the previous books but because the main characters from the original series do appear here, you may well end up super curious about them and want to read their stories. However, allow me reiterate that it isn't an absolute necessity to do so.

This Is Crazy is the story of two people brought together by one tweet. Yup, you read that right. A tweet, but hey, that isn't so crazy when you think about how many new relationships--platonic or otherwise--are made online. What was crazy was what sparked that tweet in the first place. But then can we really blame Zara Stone for tweeting what she did after learning that her ex-boyfriend--who ended their lengthy relationship claiming he needed to focus on work--was engaged four months after their break-up? If anything, I'd say addressing her tweet to Evan Richards, one of hockey's current stars AND her ex's favorite player, asking him to be her date in crashing her ex's nuptials was a stroke of (mad) genius. The clincher? Evan's acceptance of Zara's date idea! His sister thinks Evan's nuts, and her family thinks Zara's certifiable, but then no one ever said falling in love required sanity, right?

Can I just say that this book was one of the highlights of my week? I loved that quirkiness of the story and how Evan and Zara were two of the most endearingly adorable people I've come across in my latest readings. I seriously thought the story would go one way, but nope, it had its own unique map drawn out, and I was happy enough to just lean back and enjoy the heck out of the awesome ride. I absolutely loved this book and it's such a fantastic start to this new series, to the point that I'm really excited to read the second book already because it has to do with Zara's twin sister, Zoe, who was a standout supporting character. This Is Crazy easily gets five out of five stars. ♥

Purchase This Is Crazy on Amazon | Apple Books | B&N | Kobo.