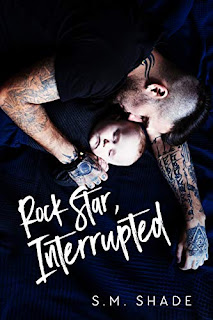 Well, now... Clearly I've been missing out because I had absolutely NO clue just how good of an author S.M. Shade is! I'd read really good things about Rock Star, Interrupted, then I checked out reviews for her earlier books, and it was obvious that I was going to have to rework my to-be-read list and add every single one of them. But one thing at a time, and my focus for right this moment is Shade's Rock Star, Interrupted, the first in the Tragic duet. This is the story of Axton Todd, lead singer, guitarist, and songwriter for Tragic. Just when his band finally hits it big and he's relishing the life that he now has because of all the hard work he and his band mates have put in, Axton receives news that forces him to shift his priorities around. He has a ten-month-old son named Caden, and with the baby's mother having passed away, Axton becomes the only viable guardian to take him. He knows nothing about being a father, what with not having the best of examples, and even with the help of his sister, Ax realizes he needs a live-in nanny for Caden. He just never expected for Naomi Wells to be such a damn maddening distraction.

I had no idea this book was going to go in the direction that it did, but holy moly, I decided to just buckle in, hold tight, and enjoy the frickin' ride, and what a fantastic ride it was! Fair warning: this ends in a cliffhanger, and it was a doozy of a cliffy, but I happened to be fortunate enough to have the second book ready and waiting because I would have gone nuts had there been months in between. My favorite thing about this novel is that it isn't "just" Axton and Naomi's story, but it was Axton, Naomi, AND Caden's story. I loved seeing how Naomi was such a nurturing, motherly figure for Caden as much as I loved how Axton evolved as a father to his son. Then there were the other notable relationships--Ax with his band mates, Jude, Elliot, and Brysen, Ax with his younger sister, Danielle (aka Dani), and Naomi with her best friend, Paige--most of which I considered more or less healthy, but there was one that I was a wee bit wary of. There's a lot of tension in this book, and there's also a surprising amount of suspense added in the last quarter, making Rock Star, Interrupted a totally five-starred engrossing read. ♥