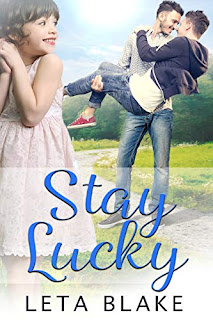 Confession time: I had NO clue Leta Blake had a pseudonym! Under the pen name of "Halsey Harlow", Blake released four books in 2018, and now she's re-released the first among them under her more well-known name of "Leta Blake". Stay Lucky is a second-chance romance between cardiothoracic surgeon Grant Anderson and single father Leo Garner. When Grant was dating Leo six years ago, he was on his way to falling in love. And then Leo's movie star ex-boyfriend unexpectedly returns, sweeps Leo of his feet, and has him agreeing to move to California faster than Grant can beg him to not go. Not that Grant would ever beg. That's not his style. So off Leo went while Grant stayed, but now Leo's back with his four-year-old daughter, Lucille Marie, aka Lucky, in tow. Of all the places he sees Leo again, it's at the very same hospital Grant works at. What's he doing back, how does he have a daughter, and where's his superstar partner? Not that Grant really cares. After all, he's moved on from Leo. He doesn't need answers to the questions running around his head.  It's not like they're getting back together. Right?

I was totally smitten by this book! Grant was a tad obnoxious and quite grumpy, but there was a side to him that highlighted how good of a guy he was when he was with both Leo (once Grant got over the hurt caused by Leo's rejection six years prior) and Lucky. He was protective and loyal, and for all of his aloof demeanor that had other people wanting to keep their distance, he was someone who loved deeply. To be honest, I related more to Grant than I did to Leo. Speaking of the latter, I was a tad wary of him given that he upped and left Grant as soon as his ex returned, but the more I got to know him and after several revelations were made, I adored him as much as I did Grant. Let's not forget Lucky, of course! She was both precocious and precious, and goodness, but how she reminded me of my youngest sister at that age. I loved the connection she shared with Leo and the one she formed with Grant. I don't want to give too much away, so all I'm going to say is that you need to go read Stay Lucky, and I'll be counting the days before Stay Sexy--a collection of Grant and Leo shorts--is re-released! Five stars. ♥