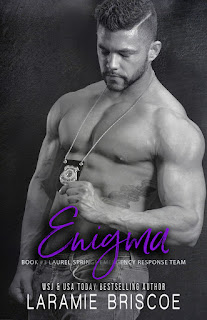 Enigma is the third novel in Laramie Briscoe's Laurel Springs Emergency Response Team series, and it's a second chance romance featuring K-9 handler and trainer Tucker Williams and medical assistant Karsyn Fallaway. What Tucker and Karsyn had was supposed to be nothing more than casual, but when Karsyn confesses her feelings to Tucker, he does the one thing he knows how to do: push her away and end things between them. Over the year since the last time they even exchanged words, Tucker knows that losing Karsyn is one of the greatest regrets in his life. He wants nothing more than to have that second chance to prove to her that his feelings were never in question, only his worthiness of her love, but Karysn has never quite gotten over the fact that he broke her heart the way he did. She's wary and worried about putting her heart on the line once again, but if she's being honest with herself, Tucker is still the only guy she's ever really offered her heart to. When her past comes back to haunt to her, it's Tucker that she runs to, and this time around, he has no intention of ever letting the woman he loves go.

Second chances, a bit of mystery and suspense, and a whole lot of awesomeness in the form of Major, the majorly fierce yet sweet K-9, make up Laramie Briscoe's latest LSERT book, and it definitely kept me happily entertained from start to finish. When it comes to second chance romances, I prefer a bit of groveling. After all, there's a reason why the break-up happened in the first place, and getting back together as soon as one party decides they want a second chance makes it feel as if no lessons were learned. Thank goodness Tucker and Karsyn put their time in, meaning they took stock of where they were when they went their separate ways and made necessary adjustments. It was also great having a number of people from the Moonshine Task Force series make cameo appearances here, and of course, we have the recurring characters from the earlier LSERT novels. My favorite, however, was Major, who I would have given a hearty head scratch to. The pace of the story was great and I enjoyed seeing how much Karsyn and Tucker--especially Tucker!--had grown. Enigma gets five stars. On to Cutter! ♥