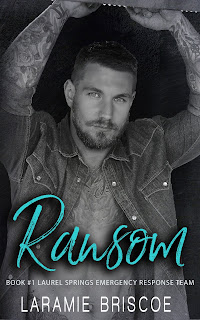 Laramie Briscoe's much loved Moonshine Task Force romantic suspense series ended with the story of the eldest among the next generation of characters, Caleb "Cruise" Harrison. The spin-off series, Laurel Springs Emergency Response Team (aka LSERT), kicks off with the younger members of the very same next generation. It begins with Ransom Thompson, the twenty-six-year-old elder son of Holden and Leighton Thompson--aka Havoc and Leigh--and the lone member of the MTF with a K-9 partner, two-year-old Rambo, and Stella Kepler, the twenty-eight-year-old daughter of Ryan and Whitney--aka Renegade and Whit--and medical assistant. They've known one another since they were in diapers and have been nothing more than friends for most of their lives. And then something changes and they start to see each other in a whole new light. The attraction that's been simmering for months finally boils over, but is either one willing to put their friendship and the entwined relationships their families share to take a chance on something more, and will it take something drastic for them to realize that the risk is worth it?

Ransom was a really fantastic start to this new series, with a toned down version of the action and suspense in the original series while still maintaining that same level of romance nonetheless. It was interesting to see just how grown up this second generation of Laurel Springs residents are, particularly the kids of the original members of the Moonshine Task Force. I loved that Ransom and Stella had their own story to tell but also maintained close-knit ties with their respective immediate families AND the extended MTF family. While the elder--not elderly!--MTF folks were present and accounted for, the spotlight was very much on Ransom and Stella. If there was anyone who ended up stealing anything, it had to be Rambo, who stole my heart. The accusatory look he would give his Dad so reminded me of my own furry, four-legged baby boy. There were a couple of times that tears threatened, so there was definitely some heart-tugging moments that got to me. This was all part and parcel of what made this Laurel Springs Emergency Response Team series starter a great read, leaving me excited for even more. It gets five stars! ♥