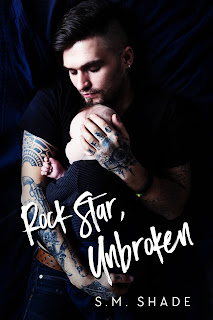 Oh my! Talk about a topsy-turvy read! Funnily enough, the person I suspected to be behind everything in the first book turned out to be right, yet the motive for why they did what they did shocked the heck out of me! I certainly didn't see it coming. But I'm getting ahead of myself. S.M. Shade continues the story of songwriter and rock star Axton Todd and former teacher turned nanny Naomi Wells in Rock Star, Unbroken, the final novel in the Tragic duet. This picks up where Rock Star, Interrupted left off, and this is where I politely yet pointedly suggest--cough, insist, cough--that you read the books in order. You CANNOT jump into book two because there is a continuing story line. For everything to make sense, Rock Star, Interrupted must be read prior to reading Rock Star, Unbroken.

Fair warning: I may mention something in this review that could turn out to be spoiler-like if you've yet to read the first book. Everything that Axton and Naomi have built towards has fallen to the wayside after Naomi is accused of doing the unthinkable. Ax is filled with regret--regret for trusting this woman who was breaking down his walls but now looks like she was on her way to breaking his heart. But it isn't broken, not when his time with her was nothing but scratching an itch. There's no way his feelings went any deeper, or at least that's what he tells himself. He can deny his feelings for Naomi all he wants, but what he can't deny is how much his son desperately misses his nanny. But Naomi was always more than just Caden's nanny. Can Ax admit that she meant more to him, and if he does, will he be able to trust her, not only with his son, but with his heart? Do they start over and accept it's over?

Can I just say that I love that S.M. Shade doesn't allow her characters to take the easy route in resolving their issues? I know that may sound strange, but I prefer reading stories where the main characters are complex and their situation is complicated because then it forces them to work for that happily-ever-after--to make sure that they deserve it. And see, that's the thing with Ax, Naomi, and Caden--they've earned their HEA. Yep, no more cliffhangers plus a guaranteed happy ending; however, after everything that happened in book one, the adults had to contend with a slew of complications before getting to where they're headed and that made for a really great read. The villain is who I pegged it to be; their reasoning caught me off-guard, and kudos to the author for that. Rock Star, Interrupted reeled me in, and Rock Star, Unbroken has me hooked on Shade's writing. The Tragic duet may be over, but I'll be keeping an eye on this author going forward. Five out of five stars for Rock Star, Unbroken. ♥

Read my reviews for the Tragic series: