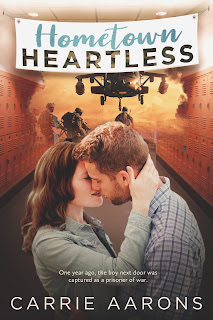 “I'm never leaving you, Kennedy. I am yours. Forever.”

I've read almost all of Carrie Aarons, save for one or two of her earlier releases that I still have on my to-be-read list, and I've loved reading the heck out of each of them, but goodness, she really put me through the wringer with her newest novel. Hometown Heartless is a standalone romance that falls somewhere between mature young adult (M-YA) and new adult (NA). It tells the story of Everett Brock and Kennedy Dover, next door neighbors and close friends who grew up together--who would go on to fall in love with each other. He was a couple of years older than her, so even when he realized his feelings for her, he also knew he would have to wait. She was still a sophomore when he enlisted, going on to become a Marine. He asked her to wait for him, and it was a promise that she readily made and kept. Two years ago, he left and swore he'd return for her; one year ago, he was captured by enemy forces and held as a prisoner of war. Now, Everett is back in Brentwick, but any sign of the boy who left--the boy Kennedy has been waiting for--is gone. She still loves him...but he claims he no longer loves her.

It's fair to say that I'm a bit of an angst addict, and this book? Well, it's got a whole lot of angst, but that's not the only reason why I'm so affected by it. This is every bit a Carrie Aarons novel but on a different scale, pushing beyond what could be considered the norm for her and taking it to an even higher level. She's given fans and readers a complex story, and while I've read my fair share of romances that have a main character suffering from post-traumatic stress disorder brought on by their military service, this was the first one that had veteran who was as young as Everett. His time as a marine may have been short, but no one should prescribe a set duration of time in which to be declared a veteran, a hero, or sufferer of PTSD, and Everett was all three. My heart went out to him, even when he was treating Kennedy in the manner that he did after he was discharged. Speaking of Kennedy, she may have still been a teenager when the boy she loved returned, but she grew up quickly and endured and overcame her own challenges. She stood up for herself when needed and loved fiercely and stayed loyal to that love. I've enjoyed all of my past reads from Carrie Aarons, but Hometown Heartless is extraordinary. Five-plus stars. ♥