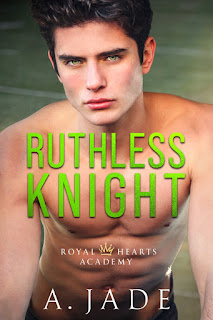 When I was done reading Cruel Prince, the first book in A. Jade's Royal Hearts Academy series, I knew that whatever was going to follow next had HUGE shoes to fill. Well, Ruthless Knight more than met that damn challenge because Cole Covington and Sawyer Church's story is...everything. Cole and Sawyer have nothing in common. He's the star quarterback of the school, his prowess as a player on and off the field on display whenever he's around. Everyone can't help notice him, but Sawyer sees something else behind those easy smiles and flirty demeanor. She's the girl that no one notices, but Cole has been paying attention, not that he'd ever admit to doing such a thing. She's nothing like the others who hope to be noticed, so when he asks her to be his fake girlfriend, it's a shocker. But with Sawyer, can Cole finally be real?

There was so much about this book that I absolutely found myself in awe of. It isn't "just" a romance between two high school students; it tackles some pretty serious subjects as well. Cole and Sawyer were as different as night and day on the surface. After all, he was Mr. Popularity and she was, well, not exactly the belle of the proverbial ball. But whatever you may think you know about Cole, set all of that aside because there is so much more to him than you may think. And yes to Sawyer being as far from meek and helpless! I love a female main character, regardless of age group, who has backbone, and this girl has it. That doesn't mean she doesn't have her issues and challenges, but she's someone with gumption. It felt like a privilege to get to know these two and their story was to die for. Five stars go to Ruthless Knight. ♥

Read my reviews for the Royal Hearts Academy series: