Review: The Third Best Thing by Maya Hughes (Fulton U #3) 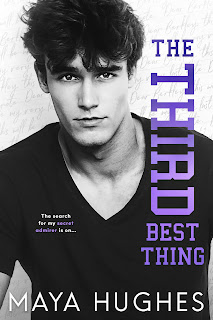 “If you're going to walk away from me, I don't want there to be any more secrets between us. I'm head over heels in love with you. Hell, I even felt like I was cheating on The Letter Girl with how much I liked you even from the beginning. And I see you, Jules.”


I loved The Perfect First, and I liked The Second We Met, but The Third Best Thing was on a whole new level of adoration. Maybe there's some truth to the whole "third time's the charm" saying because this third novel in Maya Hughes's Fulton U series just felt extra special. If you've followed the series like me, you'll remember that we got an inkling of what this book was going to be about. Suffice it to say, there was a whole lot more story to tell, with Hughes weaving a story that has the familiar elements of a formulaic new adult (NA) sports romance but also touches upon the heavier themes of familial abandonment and body shaming plus a peppering of the issue of college athletes accepting monetary compensation or enticement. This soared above and beyond my expectations.

Some people just have a way with words, and the words on paper that Fulton University student athlete Berkley Vaughn has received from one particular girl have made their way into his heart. He has no idea who she is or what she looks like, but what he does know is that her letters mean a great deal to him. So when The Letter Girl suddenly informs Berk that her most recent will also be her last, he knows he needs to find out who she is. He seeks a helping hand from the girl across the street, fellow Fulton U student Julia Kelland. But soon, this bespectacled, curvy girl who bakes a mean cookie is all he can think about. If only Berk knew the author of all of his notes and letters just happens to be his beautiful neighbor and helpful friend Jules. Can you say "complicated"?

I readily own up to the fact that there were a number of times I got teary-eyed while reading this book. Insert all the adjectives with the word "heart" as part of it here because that's how I saw Jules and Berk's story. Heartwarming, heartfelt, and heartrending, these two clicked from the get-go, and knowing that Jules was keeping a secret from Berk may seem like it was the only complication to their happy ending, but nope. These two had emotional scars because of their family histories, and working through everything that they were dealing with was not as simple as talking it out. I did, however, love seeing how far they had grown, and they were already fantastic people to begin with. The Third Best Thing may be the third Fulton U book, but it's tops in my book. Five-plus stars. ♥

The Second We Met (book two) - four stars - My Review