Review: The Second We Met by Maya Hughes (Fulton U #2) 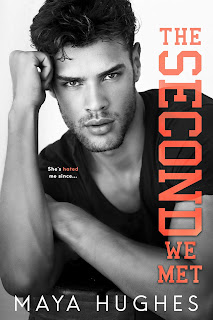 The Second We Met is an enemies-to-lovers romance and the second novel in Maya Hughes's Fulton U series. I loved the series starter, The Perfect First, and I'd been looking forward to reading Phoenix Russo's story since he was introduced in book one. Nix is a quarterback for his university's football team, the FU Trojans, and has the makings to become one of the top draft picks for the professional league...only going pro isn't exactly filling him with anticipation and excitement as much as it does his father. After all, why waste his talent one the field for somewhere else--like, maybe, his grandfather's restaurant, specifically, the kitchen?But with his father has had plans for Nix for years, and nothing, not even Nix's own dreams, will dissuade the man to believe that his son is meant for anything less than football greatness. However, no one quite planned for someone like Elle Asher, Nix's neighbor and all-around pain in Nix's behind. From the moment she mistakenly entered his place instead of hers when they were juniors, she's made it clear how much she hates him. When she reports yet another of his noisy parties to the cops, he ends up slapped with cuffs and community service over spring break. The clincher? Elle turns out to be his "boss" at the home building project. Can forced proximity to each other lead from hate to love?

Nix was truly the very heart of this book! There's no denying the guy was a hell of a college football player, but there was also so much more to him than how he handled a football. I was eager to peel back that jock exterior of his because I had a feeling he had a few surprises beneath the easy grin and confident attitude that he had on display in the first book, and goodness but how he surprised me indeed! Not only is Nix and honest-to-goodness great guy but I loved how much he adored and looked up to his grandfather, a man who had passed on his love for creating glorious food to his beloved grandson. The contrast in his easygoing relationship with his grandfather and his far tenser and less affectionate one with his father made for an interesting angle to his personal story. With as far as Elle--who is supposed to be Elle Masterson according to the blurb but turned out to be Elle Asher, which only came about really late in the story--is concerned, I confess that I wasn't a huge fan of hers. She had preconceived notions about Nix and even when she'd take that one step forward in my eyes, she'd do something to hop on back. Thankfully, she does redeem herself to some degree before we get to the end, just enough for me to be satisfied by their HEA. The Second We Met may not have been as amazing as The Perfect First, it was still a four-starred read. ♥

Purchase The Second We Met on Amazon.