Review: Before the Call by Emma Alcott (Small Town Hearts #2) 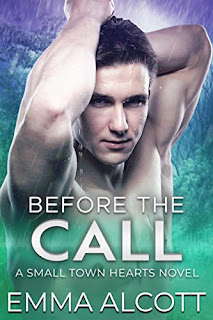 Ever since I finished reading After the Crash, I've been looking forward to whatever would follow next from Emma Alcott. What's next turned out to be the second book in her Small Town Hearts series, and yes, this can very much be read as a standalone, having no ties whatsoever with the series starter other than the fact that it's set in a small town. Before the Call is a friends-to-lovers romance that introduces readers to Gabriel Mitchell and Clark Summers, longtime best friends who lost touch with each other when Gabe left their small town of Elliston, Missouri to head off to Oregon to attend college. Gabe believed he would never return to their hometown, but when work prospects dwindle to nothing, his mother mentions an opening at his old high school. It would only be temporary because Gabe has never even considered thinking of Elliston as home again. He knows he'll have to keep his sexuality under wraps while there, and he knows he'll bump into Clark sooner or later--the same Clark he's had feelings for since they were teens. Will Clark be able to show Gabe what he's been missing since he's been away?

This was a good addition to Emma Alcott's portfolio. (Just a quick FYI: Emma Alcott is the pen name for Piper Scott's sweeter, non-mpreg author alter ego.) The initial interaction between Gabe and Clark highlighted just how different their personalities were, yet somehow, they clicked. Opposites attract and not only when it comes to romantic relationships. Admittedly, I liked Clark a wee bit more than I liked Gabe. He was such an all-around great guy who loved his family and the friends who were nearest and dearest to him. He never held Gabe's lack of initiative to reach out to him during their four-year separation against him, still full of adoration for his best friend. There was quite a bit of fumbling and mumbling going on for the most part, but when these two finally got it together, they were even more adorable as a romantic couple. Bonus points for the story line angle on Devon, the eldest among Clark's younger siblings. (A tip: Make sure to snag the freebie featuring Devon via Acott's newsletter.) Overall, I enjoyed Before the Call and cannot wait to visit the next small town Alcott has in store for us! Four stars. ♥

Read my reviews for the Small Town Hearts series:

Before the Call (book two) - four stars - My Review (posted above)

Purchase Before the Call on Amazon.