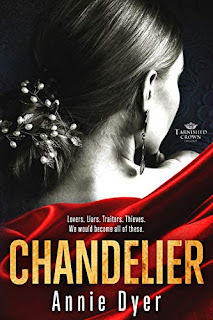 Annie Dyer was a new-to-me author prior to my introduction to her writing, and what an fascinating introduction it turned out to be! Chandelier is the first novel in Dyer's Tarnished Crowns, and it's the story of a twenty-seven-year-old Scottish princess who is the spare to a tarnished crown, but becoming heir is nothing Princess Blair has to worry about, not when her brother is primed to become king. That doesn't mean, however, that she is free to live her life the way she chooses. She finds out that she's more pawn than princess, having been promised in what feels like more of a merger than a marriage to the English Prime Minister. She may seem like nothing more than a chandelier--beautiful to look at, shiny and bright, but nothing more than ornamental. But two men look at her differently--Benjamin Smith, head of Blair's security, and Isaac Everleigh, aide to England's prime minister. She's known Ben for more than half her life, and Isaac is someone new. Both men are keeping their share of secrets, but how will those secrets impact Blair, and what role will they play in her life once a single act of violence changes it?

I have a thing for British royal history, and that extends to the ties the British monarchy has with Scottish history. Annie Dyer has taken her creative license and weaved the sort of opening salvo that has, at the very least, guaranteed that I'm sticking around for the second novel. Okay, okay, for the third one as well, because darn it, I'm emotionally invested now! How could I not, what with all the intrigue that surrounds Blair. She is not some ordinary princess who gives the barest of smiles and is better seen than heard. Nope, what we have here is a woman who bears the burden of a tarnished crown but that is only the beginning of her burdens. However, she's got a head and heart that I believe will bear whatever's thrown her way, and she's not going to be grinning and bearing it as the old adage prescribes. Blair is a warrior and her relationships with both Ben and Isaac have me as curious as much as those she she has with her brother and her parents, as well as certain members of her staff. Dyer may have been new to me going into this book, but consider me hooked. Chandelier gets five out of five stars. ♥