Review: Dream with Me by Kristen Proby (With Me in Seattle #13) 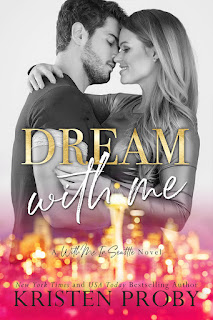 Come Away with Me was my first read from Kristen Proby back in 2013, and all it took was that one book for me to fall in love with her writing. Admittedly, though, I've missed out on reading the eighth till the twelfth novels including any novellas in between plus the Burn with Me novella in the With Me in Seattle series, which falls after the sixth novel but was released in 2018. I became re-acquainted with the series through the most recent novella, Wonder with Me, but it was the latest novel, Dream with Me, that now has me antsy to reacquaint myself with the Montgomerys and not just catch up on the stories I've missed but also reread the ones from years ago before the next book comes out. But I digress! This review is for Dream with Me, the thirteenth full-length novel in the With Me in Seattle series and all about cake designer Anastasia Montgomery and glassblowing artist Kane O'Callaghan.

When Anastasia Montgomery's muse refuses to help her out with her latest cake design, she heads over to her favorite museum in hopes of it sparking inspiration. Alongside that creative spark, however, is a whole different kind of spark once she meets Kane O'Callaghan. The glassblower is an artistic genius and owns the museum, and matched with his good looks and Irish accent, Stasia finds herself drawn to him. She doesn't know that while he may miss his homeland of Ireland, it looks like Kane has a reason besides his family to like Seattle even more, and it's all thanks to the beautiful woman with an independent streak that he prefers calling by her given name. She may have thought that their night together was one and done, but he's about to show her that he's far from done.

I adored Anastasia and Kane's story! These two were made for each other, and while there wasn't a whole lot of drama coming from both of them, there certainly was from certain members of their immediate family. I admired Stasia's confidence and strength and how she loved her family and embraced Kane's as well, especially the fabulously fur baby that was Murphy (bonus points for having an adorable dog that wasn't used as just decor in the story). Kane was a revelation in that he claimed not to be a romantic, but if the man wasn't a romantic then I don't know who is! There was lots to love about Dream with Me. It gets five stars and has me excited for the next book! ♥

Purchase Dream with Me on Amazon | Apple Books | B&N | Kobo.