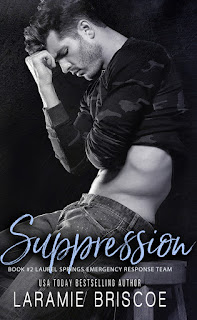 If anyone had any doubts if the next generation of Laurel Springs would live up to the expectations of readers and fans, they need not have worried! Laramie Briscoe kicked the spin-off that is the Laurel Springs Emergency Response Team series with a winner in Ransom, and she's kept the momentum alive with the second novel, Suppression, which is the story of Nickolas Kepler, adopted son of Ryan and Whitney Kepler and brother to Stella Thompson née Kepler. This friends-to-lovers story is one he shares with Kelsea Harrison, only daughter of Mason and Karina Thompson and younger sister to Caleb Thompson. You don't necessarily need to read the series starter or the original Moonshine Task Force series, but I'm highly recommending the books anyway because how can you not want to get to know the MTF/LSERT fam-bam?

Nick Kepler knows how fortunate he is. He was adopted by the best parents anyone could ask for, saving him from a life that had no real direction, and even got an awesome sister out of the deal. He has a job that he loves and is constantly surrounded by mentors and friends who make up his extended family. He even has the attention and affection of a woman he's proud to have as a friend even though Kelsea Harrison wishes they could be more. You see, Nick doesn't think he deserves someone like Kels in his life, and while everything's been good since he was adopted, he's still haunted by nightmares of a past that still lingers in the darkest parts of his consciousness. When he's called in to do a welfare check on a boy named Darren, Nick recognizes himself in the boy, and when Darren's home life becomes worse, Nick makes a decision that will change the course of his and the boy's lives. The question is: Will Kelsea choose to be a part of it?

This book brought me to tears, and when that happens, I always consider it a win. Laramie Briscoe knows how to write small-town romances with a punch of action and suspense, and her characters in both MTF and LSERT are easily likable and their love stories the kind that are guaranteed to give you the sort of heartwarming ending these tales deserve. I loved the grown-up versions of Nick and Kelsea, and I absolutely empathized with why Nick was hesitant about becoming romantically involved with one his closest friends. As always, this book highlighted the importance of family and how taking a chance on love will reap the greatest rewards. Suppression gets five stars, and I cannot wait for the next book in the series. ♥