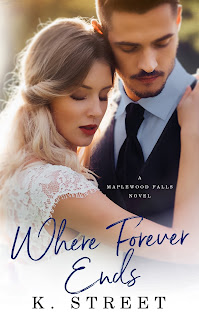 I have an affinity for small town romances, so when the opportunity to start a new series and discover a new-to-me author came about, I took a chance and I'm glad I did. Where Forever Ends is the first novel in a series entitled Maplewood Falls penned by K. Street. The central character here is a single mother named Saylor Rayne Ferraro who went from being a wife to a widow at twenty-eight. It's been almost ten months since she lost her beloved Colin and all she has left of all their dreams together is their three-year-old son, Knox. She's drowning in her grief and thinks the best thing would be for her to leave the life they had left behind in North Carolina and move back to her hometown of Maplewood Falls, Georgia. But moving forward doesn't get any easier, not even when she has her parents and older brother supporting her. And then she comes face to face yet again with Jase Michael Turner.

Six years her senior, Jase was always her brother's best friend and her teenage crush, but Jase only saw her as Saylor--the girl he nicknamed Socks and his best friend, Easton Chadwick's, baby sister. Now, though, Jase sees her through different lenses. They both know all too well what loss feels like, and how moving on is much easier said than done. Jase wants to be there for his Socks, even if all she's ready for is friendship. He stirs within her emotions that she feels guilty over, which is why she'd rather not acknowledge them. But there's no denying the connection that they share nor can Saylor overlook the bond that Jase has created with little Knox. The more time they spend together, the more Saylor's feelings for Jase develop. She still loves and misses Colin, so what happens with Jase?

My favorite thing about Where Forever Ends had to be the reiteration that while Saylor's forever with Colin may have come to an end, it doesn't mean that a new beginning with Jase was a sign of betrayal of Colin's memory or all their years together. I loved that what was highlighted was loving Jase didn't mean no longer loving Colin--that loving two different men in the way that Saylor did was not wrong. I appreciated the slow burn approach that the author used when it came to Saylor's story--both in terms of her living her new normal without Colin and her relationship with Jase. It felt like a nod of respect to the memory of Colin while acknowledging that Jase was the man she could have the possibility of a future with. Of course, I loved the whole idea of family, friendship, and community, and I'm really looking forward to reading Easton's story next in the Maplewood Falls series. 4.5 stars. ♥

Purchase Where Forever Ends on Amazon.