Review: It Was Always You by Erika Kelly (Calamity Falls #5) 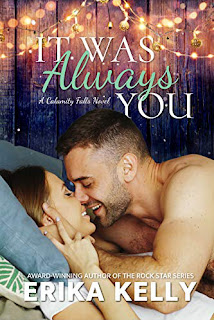 It Was Always You is the fifth book in the Calamity Falls series, which used to be the Bad Boyfriend series (more on that later in this review). This is a second chance romance about a professional football player and a pop star and how love finds a way even after years apart. Cassian Ellis first fell in love with Gigi Cavanaugh when they were both fourteen years old, and over the next few years, the two become each other's best friend. His mentor was her father--a man he respected and had such belief in him. When Tyler Cavanaugh promised Cassian he would be by the boy's side helping him make it all the way to the pros, it came with a heavy price--Cassian was to not pursue anything romantic with Gigi. When Cassian broke Gigi's heart in their senior year of high school, they went off in different directions. Nine years later, the two former friends again, and this time, Cassian intends to win Gigi back.

I may have been a wee bit confused with the whole change in book titles and series name. If I'm being perfectly honest, I liked the original series and book titles and felt it would have been better had for this new book to be the first in a spin-off series since the Bowie siblings all got their happily-ever-afters in the first four books. But then, this was a decision that the author made, and if the change was one she felt was necessary and would serve her brand better, then I respect that. Now, as far as Cassian and Gigi's story is concerned, I did, for the most part, enjoy it, although there were numerous times that I wanted to sit these two down and force them to communicate better. Seriously, it felt as if they never left high school. We get bits of the Bowie clan, but not enough that you may be curious about who they are since they aren't main players in Cassian and Gigi's story--which leads me back to wishing this were a spin-off, but that's just me. I wonder, though, about Tyler Cavanaugh. Has his story been told ? I feel like I should know it. If you know the answer, do let me know via a comment! 3.5 stars for It Was Always You. ♥

Read my reviews for the Calamity Falls series:

Purchase It Was Always You on Amazon | Apple Books | B&N | Kobo.