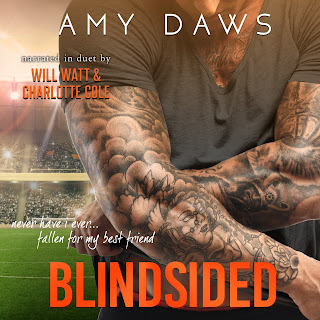 The Blindsided audiobook is the newest spin-off in Amy Daws's Harris Brothers book universe, and it's narrated by none other than Will Watt and Charlotte Cole, Daws's go-to narrating duo and for good reason. This friends-to-lovers romance is about Maclay Logan and Freya Cook. For those familiar with this book world, Mac is best friends with Roan DeWalt (Payback) as well as his roommate and teammate, and Freya works for Sloan Harris (Surrender and Dominate). That being said, this audiobook can be listened to independently of any the aforementioned ones.

Mac Logan and Freya Cook have Netflix-and-chillin' down to a science. Now, now, get your mind out of the gutter. We're talking about actually binge-watching Netflix shows and chilling with each other on their downtime. They're happily and comfortably in each other's friend zone and have been for a year. So comfortable, in fact, that when Mac finds out that Freya needs to learn the ways of flirting and dating, he offers himself as tribute. He's even willing to rid her of her V-card. They swear they'll stay friends and promise to not fall in love. Easier said than done.

I'd be hard-pressed to find anything I didn't love about this audiobook! I'd already read and fallen madly in love with the book when it was released late last year, but I'm a bit of an audiobook addict, and you can never go wrong with Amy Daws's audiobooks. Will Walt and Charlotte Cole's dual narration had me wanting to stand up and scream "GOOOOOAAAAAL!" The blurb mentions Mac and Freya learn that they should never all in love with their best friend, but I highly recommend you go ahead and fall in love with Blindsided. It's bleddy good! Five-plus stars. ♥

Learn more about Will Watt and Charlotte Cole.