Review: If We Were Young by Anna Bloom (If We Were #1) 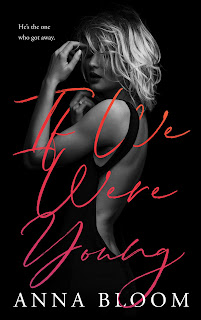 Anna Bloom is a new-to-me author and her If We Were series starter, If We Were Young, was my introduction to her writing. This is the story of Veronica Childs and Matthew Carling. There was once a time when Ronnie and Matty were once the closest of friends, each one's closest confidante, the one person they knew would never let the other down. Only that's exactly what happens. Or maybe it's what didn't happen between them that caused the rift that they never came back from. Their friendship ended, and the two former best friends went their separate ways. It takes a decade and a half for their paths to cross. Maybe it was fate, or maybe it was nothing more than circumstance, but Ronnie has had had questions swirling in her head. What would have happened had she said "yes" to Matty? What if she had followed her heart and never broken his? Things went the way they did when they were younger, but maybe Ronnie has a chance to satisfy her own curiosity--to right the wrongs that continue to haunt her. But if fifteen years didn't thaw Mattty's heart towards her, will fifteen days be any different?

This may only be my first read from Anna Bloom, but it certainly won't be my last, not with storytelling as good as what I found between the proverbial covers of If We Were Young. Love stories, the ones that are about the truest sort of love, aren't meant to be perfect. I know that happy endings have become a must for romance readers, and rest assured, Ronnie and Matty's story does end quite happily. However, the path to that happily-ever-after doesn't come to them easily. Neither of these two are perfect, which is something that I actually rather prefer. These two made their mistakes and had their missteps. They hurt one another and it cost them dearly. It would be simple enough to say that they were always meant to be, but that doesn't mean that they were meant to be together when they were younger either. If anything, I'm a firm believer that things happen for a reason and that everything happens in its own perfect time, which was the case for these two. The cast of supporting characters--well, most of them, anyway--were highly notable. I'm excited to see what Bloom has up next. Four stars go to If We Were Young. ♥

Purchase If We Were Young on Amazon.