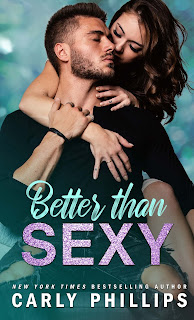 Better than Sexy is the awaited third book in Carly Phillips's Sexy series, and it's definitely the one I've been most curious about because of who the story is about. After the events that led to the re-arrest of the guy whose actions led to the death of his twin brother, Levi, when they were in college, Landon Bennett wants to find a way to bring in even more people into TEN29, the club he co-owns with his two best friends. What better way than to offer up a summer residency to a highly promising songstress named Vivi Z, whose online video has more than caught his attention? When they meet in person, the connection between them is immediate, and Landon knows that having her perform in the club will make her even closer in proximity to him. But will Landon still want to pursue anything with her, whether personally or professionally, when he realizes that Vivi Z is actually Vivienne Clark--the younger sister of none other than Victor Clark, who was guilty for Levi's death and later for other crimes related to TEN29?

Ah, this book was everything I'd hoped it would be! I loved that undeniable chemistry between Vivi and Landon, and how these two connected in ways that went beyond just the physical. It's pretty much certain from the get-go that Vivi's identity is something that Landon isn't aware of and that when it is revealed, it becomes the expected point of conflict given her familial ties to Vic. I will say, though, that I was glad that Carly Phillips went beyond that, exploring just how difficult it was to maneuver around the proverbial elephant in the room and that affected not merely the two of them but Landon's parents and best friends and partners, Jason and Tanner, as well. My heart went out to everyone concerned, especially Landon and Vivi, and while I knew that they were going to get their happily-ever-after, I was still on the edge of my seat as the hurdles kept coming. From start to finish, Better than Sexy had me hooked, and it's turned out to be not only "better" but the best in the series (so far!). It gets five stars. ♥