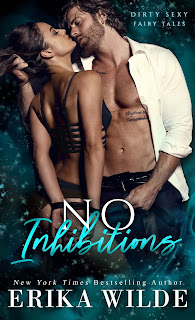 No Inhibitions is the third release in Erika Wilde's Dirty Sexy Fairy Tales series, and it's inspired by the Disney animated romance film Lady and the Tramp, which was, in turn, based on an article that appeared on Cosmopolitan titled Happy Dan, The Cynical Dog penned by Ward Greene. Book three is about Tempest Wilder--only sister to older brothers Maddux (Total Surrender, book one of Dirty Sexy Fairy Tales) and Hunter (Absolute Pleasure, book two of Dirty Sexy Fairy Tales)--and Remy Lowell. When they met, she was the twenty-three-year-old sister of his new client, and he was thirty-year-old recently divorced contractor working for her oldest brother. Flash forward three years later, and now, it's Tempest that needs Hunter--in a professional capacity. She wouldn't mind having him in a personal way either, but neither of them is looking for anything permanent, not with Tempest focusing on launching a new business and Remy being mistrustful of women. Maybe there's no harm in a no-strings-attached arrangement, but once they become entangled in each other's heartstrings, things could change.

So far, this third Dirty Sexy Fairy Tales book is the one with the least amount of angst and the story arc regarding the murder of the Wilder siblings' beloved parents isn't as prominent here as in the first two books. The first four chapters share the same timeline as the series starter, Total Surrender, but you can read any of the books as standalones if you'd prefer. Tempest and Remy are interesting enough main characters, supposedly having a shared attraction that neither one had acted upon until the night of the charity ball that changed the lives of all three Wilder siblings. If I'm being honest, though, that connection didn't feel all that strong until probably in the last quarter of the book. There isn't a whole lot in terms of seeing the relationship between Tempest and Remy grow; rather, we're told that they've moved through the stages. I would have also wanted a bit more of the quieter moments between the two. I'm all for great sex on the page, but I love having that balance between lust and love--sex and romance. Still, No Inhibitions was a good read and gets 3.5 stars. I'm curious about one couple and one foursome here, so I look forward to reading more of Erika Wilde's dirty and sexy modern-day fairy tale romances. ♥