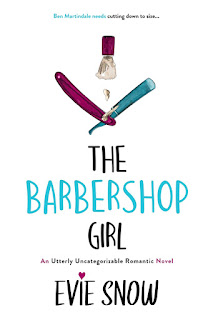 The Barbershop Girl is my first read from Evie Snow, and when I'd initially signed up to review it, I did what I usually do: check on Goodreads to find out if it was part of a series or not. I learned that the book was previously released under the same title but with Georgina Penney as the author. Penney is part of the duo credited with the pen name of Evie Snow, the other being Tony Johnson. At the time, I didn't notice the book being part of a series, but it looks like with the book being re-released and re-branded, it's now part of a series titled Evangeline's Rest. Fortunately, The Barbershop Girl didn't have me feeling as if I was missing anything from either of the first two book in the series, so it's safe to say on my end that this can still be read as a standalone without any reservations.

The Barbershop Girl is the story of Ben Martindale, a British writer and comedian, and Amy Blaine, the titular character. In the midst of yet another scandal, Ben decides it would be best to head Down Under and allow everything to cool down. While there, he meets Amy, who is the epitome of a pin-up girl from the 1950s and runs her own barbershop. He's immediately fascinated by her--and by fascinated, it means that he uses her and those around her as fodder for a series of articles for his weekly column in London. Amy is devastated when she learns of Ben's actions, realizing that she should have listened to her gut and not trusted a man like him. It takes her cutting ties with him for Ben to finally understand the error of his ways. Can he convince her to give him a second chance?

This turned out to be a rather entertaining read, and one with an original feel to it. Ben was one of those characters I had a love-hate relationship with. There was no denying the guy could charm the underpants off anyone he bothered to pay attention to, but then there was also the stuff he wrote about Amy, her family, and her friends. Maybe he didn't mean any harm and was simply doing it for the humor, but what's funny to one doesn't mean it's funny to all, especially when you happen to be the one being made fun of. As far Amy, I quite adored her, and I liked that she was her own person. Now, I mentioned that this could be read as a standalone, however, I am curious about certain supporting characters, so I may check out the pother books in the series when time permits. Evie Snow has shown that they've got the chops for writing read-worthy books like The Barbershop Girl. 4.5 stars. ♥