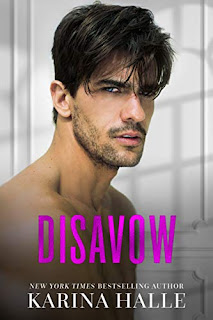 Karina Halle closes out her Dumonts series with the best book of the lot. Disavow is the story of Pascal Dumont, the one considered the most ruthless heir to the fashion empire. He does what he wants without apology, and what he wants he gets, which most certainly includes women. The woman who has snagged his attention right now is his new personal assistant, Gabrielle Caron, but she's not someone new to Pascal. You see, Gabrielle was once a servant within the Dumont household, her mother the head maid, but eight years ago, Gabrielle upped and disappeared. Now she's back, and any sign of the timid, awkward girl she once was is gone. In her place is a much more confident and put-together woman, and she has her reasons for returning, none of which she's willing to share, especially not with Pascal. She won't hesitate to do what she has to in order to achieve her goal, but the closer she gets to Pascal, the more she realizes that there's more to this man she had once pegged as spoiled and arrogant. When everything's said and done, will Gabrielle and Pascal be able to survive all the secrecy and scandal?

Karina Halle had a tough job on her hands: convince readers that a man like Pascal was worthy of hero status. After all, he made it easy to hate him in the previous books, but with Halle behind the proverbial pen, I knew that, at the very least, she was going to try her damnedest to make readers see him in a better light. And that was exactly what she did. Make no mistake, Pascal was NOT an antihero, at least that's not how I saw him. This was someone who had a story to tell, and as I turned each page and the chapters moved from one to the other, it was clear that his story was compelling. Of course, a lot of that shift in perception had to do with Gabrielle, who was every bit of an attention grabber as her male counterpart. I love it when an author gives two main characters who I feel are on even footing in terms of personality and development. Pascal and Gabrielle had such a strong connection to one another, and that mix of romance and suspense are nicely balanced, but then I'm not all that surprised considering who the author is. While the series got off to a rocky start for me, it ended on quite a high. Five stars for Disavow. ♥