Review: The Affair by J.L. Berg 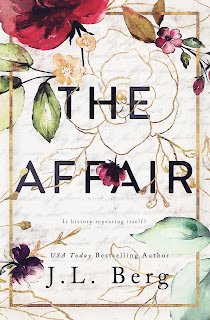 Oh, J.L. Berg, how I've missed you! It feels like forever since I last read something of hers--though it's been about a year and a half in all actuality--and many of her stories that I've read have become personal favorites of mine for good reason. Now, she's back on my Kindle app courtesy of The Affair, a brand-new contemporary romance standalone. If the idea of an illicit affair is a hard limit for you and the title has you hesitating, all I'm going to say is that just like with covers, you shouldn't judge this book without actually diving in first. Trust me, there's far more to it than you may think. It's about love and its complexities, but how, ultimately, it is the simplest of anyone's needs.

The Affair is the story of Eloise Woods, a woman who finds her life at thirty-three reeling from one blow after another. Her marriage ends after her husband confesses he cheated; her father passes away from cancer; and her mother announces her move to North Carolina to live with Elle's younger brother and be closer to her grandchildren. That third blow leaves her with their family home and her mother's business, Timeless Treasures--the same business that Sawyer Gallagher, her ex-husband's older brother, shows up at, hoping to be hired. Sawyer's presence and finding a journal belonging to her late grandmother have Elle making new discoveries--like how Sawyer is nothing like his brother, Reed, and how her grandmother had an affair with her brother-in-law. Is her life destined to follow the path of her grandmother's or could fate have better plans for both her and Sawyer?

J.L. Berg's Elle Woods is not quite like the other fictional heroine with a passion for law, a penchant for perkiness, her spoiled pooch, and the color pink. Berg's Elle is far from perfect, and I appreciated her even more because of it. I don't like my main characters to be overly ideal, and yes, there were moments that had me feeling frustrated with Elle, but she made me want to be invested in her story. She stumbled and fumbled, but she had lessons to learn, and learn them she did, and not just in terms of her relationship with Sawyer but also her relationships with her family. Berg's writing is, as always, highly commendable, and having a female main character who realizes that yes, life is complicated but there's no need to make it even more so for ourselves, made The Affair a five-starred read. ♥