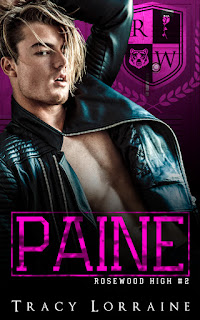 Tension and angst--this book has it in spades! Gah! Naturally, this makes me a very happy camper, and Paine has officially taken Tracy Lorraine's Rosewood High series up a notch. Book two in the series is a friends-to-enemies-to-lovers story between Mason Paine and Camila Lopez, and it picks up where book one, Thorn, left off. There was once a time when Mason and Cami were as close as two friends could get, but all it took was one act of betrayal that led to Mason's life to crumble around him for that friendship to abruptly end. Cami has no idea why her childhood best friend would cut ties with her, but they've led separate lives since then with barely veiled animosity towards each other. But when Cami's own world collapses from under her, Mason doesn't revel in her misery--not when his instincts have him being a source of support for the girl who once owned his heart...and maybe still does.

Oh, Mason... Goodness, but how this boy had my heart. Nothing came easily in his life, particularly after a certain point in which everything changed. I understood why he felt the way he did towards Cami, and how could I not feel for the guy when she was such a vital part of his life that he chose to sever? Speaking of Cami, I quite liked her as well, though she was a wee bit naive at times, which isn't necessarily synonymous with being an innocent. This second book gave me a better understanding of why both Mason and Cami were the way they were in the first book. I love that Tracy Lorraine didn't skimp on their back story. Overall, there was a lot that I loved about Paine, and this series is turning out to be one of the more addictive bully romances around this year. Bring on book three! ♥