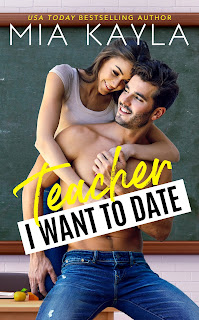 Teacher I Want to Date is the second book in Mia Kayla's Brisken Brothers series, and it features Mason Brisken, Vice President of Brisken Printing, and Gabriella Cruz, an eighth grade teacher. When Mason learns that his thirteen-year-old niece Sarah is meeting a group of her friends that includes a boy that she appears to like, he does his due diligence as her uncle and secretly follows her. Unfortunately for Mason, Gabby mistakenly thinks he's a predator who has set his sights on Sarah and her friends and calls in the police. Now, Sarah feels even farther away from Mason and all he wants is to fix things, and who better to help him than Sarah's teacher--who just happens to be Gabby! He may not have been a fan of Gabby's after she snitched on him to the cops, but now that he's gotten to see her up close, he wouldn't mind getting more personal with her. Maybe she can teach Mason a thing or two.

Prior to reading this book, I wanted to double check and find out if it was a true standalone or was part of a series, The title having a similar format as the previous release from the author clued me in, and while the two are not listed on Goodreads as being part of a series, a bit more digging on the author's website showed that they were, indeed, part of her Brisken Brothers series. Here's the thing: I prefer to read a series in order, even when an author insists that all the books are standalones. More often than not, there are recurring characters and interconnected story angles. I didn't have the time to read the first book about one of the other brothers, Boss I Love to Hate, and when I started reading Teacher I Want to Date, it was clear I was missing some pertinent back story about the three brothers, especially the eldest one, but his story hasn't been published, yet it so felt like it already had been.

Mason and Gabby certainly had one of the most hilariously awkward meet-cutes I've come across in some time, and for the most part, I did like these two together, and their respective families definitely brought in even more laughs. Mason spying on Sarah, who was the older of his two nieces and the one he had the stronger bond with, did come off more creepy than funny. I have nieces and nephews as well as godchildren and the kids of my cousins, but goodness, I would never even consider stalking, erm, following them somewhere solely based on the fact that the group of friends they were going to be had boys and girls. Then there was the drama with the ex, and I'm all for drama but this was a wee bit too much. As far as the romance between Mason and Sarah went, though, consider me entertained. They had a connection; I just didn't have one with them. Teacher I Want to Date gets three stars. ♥

Purchase Teacher I Want to Date on Amazon.