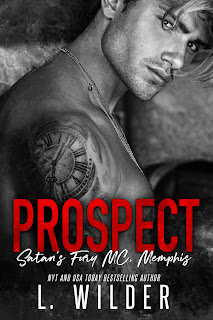 We finally have the prospect's story! Okay, for the record, there's usually more than one prospect within the Satan's Fury motorcycle club, and there have certainly been a few notable ones; however, as of late, the one who's had my attention is the one who happened to be the nephew of the Ruthless Sinners MC's president. When he was a high school senior in Nashville, Clay Hanson made a choice that would forever change the trajectory of his life. As he continued to spiral out of control, his uncle decides to step in, handing Clay over to the Satan's Fury MC's Memphis chapter in hopes that being a prospect there will lead him to be more disciplined and have a firmer hold on his anger issues. He comes across social worker Landry Dawson when he spots her on the side of the road with an injured dog. They may not seem to have a whole lot in common, but there's something simmering between the two of them from the moment they meet. With Clay busy being on call as his MC's newest prospect and Landry dealing with two Department of Children's Services cases, will they have time to explore their shared connection?

Ah, but Prospect was definitely a heck of a read! I enjoyed diving into Clay and Landry's story in this eighth installment in L. Wilder's Satan's Fury MC: Memphis series. One of my favorite things about their romance is that even though the attraction is there from the get-go, it isn't rushed into nor overplayed. They have other things going on and as drawn to one another as they may have been, Clay's prospecting duties and Landry's career with DCS were top priorities. It was also interesting to see how Clay goes from a prospect to a patched member of the club, and it was clear that prospects really are put through the wringer in order to prove their worth. In Clay's case, however, there's the additional motivation of wanting to break free from allowing his rage to get the better of him. The two cases Landry was handling added more layers to the story as well, and I liked the direction both of those took, taking me by surprise when it came to how they were resolved. I'm not sure if this is the last book in the series--I hope not!--but fingers crossed we get another chapter of the club for a spin-off! Five stars go to Prospect. ♥