Review: Misadventures in the Cage by Sarah Robinson 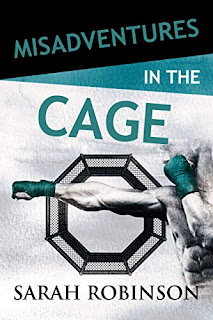 Note: An advanced reader copy (ARC) was provided by the author via Bare Naked Words.

It's been about a couple of years since I last read something from Sarah Robinson--I think it was the first book in her Exposed series--but when I learned that she had an MMA romance slated as part of the Misadventures collection from Waterhouse Press, I knew it was time to get reacquainted with her writing! After all, I loved her Kavanaugh Legends series, most of which was published through Random House's Loveswept line, so I already knew Robinson was more than adept with this particular romance trope. Misadventures in the Cage is the story of one of the rising stars in mixed martial arts and the sister of the man who stands between him and the championship he's gunning for. Think forbidden romance minus heaps of mega-angst and ill-planned dual suicides.

Callan Walsh is one of the brightest stars in the MMA, which is why he's given the opportunity to face the reigning champion in his weight division and it's an opportunity he has no intention of squandering. A distraction, however, comes in the form of Josie Gray. She's gorgeous, speaks her mind, and knows what she wants. That doesn't mean, though, that she always gets what she wants. She's had to put her dreams of becoming a chef on hold, what with her brother's career taking center stage and their family becoming part of a reality television show. Being with Callan has her realizing that her needs have to take priority, but what happens when he learns Josie just happens to be the younger sister of the very man he has been preparing to face in the cage? Will they be forced to tap out?

This was a really great read, one that reminded why I sat up and take notice of Sarah Robinson's writing by way of her Kavanaugh Legends series in the first place. Callan and Josie were fabulous main characters who had the kind of chemistry that made you want to cheer them on as they fought for a happy ending. There's a smidgen of angst, which, of course, I loved, but otherwise, this was lighthearted story that was fun and entertaining and left me with a smile on my face. I was able to read this in one sitting, and while it isn't overly long, the fact that I didn't even bother to get up and answer the phone when it was ringing highlights how into this book I was. This is an absolute standalone, so if you have never read this author before, Misadventures in the Cage is a wonderful start! 4.5 stars. ♥