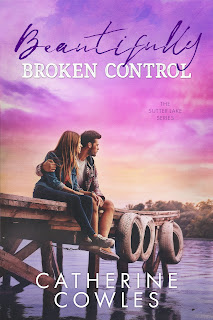 I love it when an author ends a series on a high. Catherine Cowles wraps up her Sutter Lake small town romance series--with a dash of suspense in each book, though not enough for me to personally consider them romantic suspense reads--with the story of two broken souls who find love and healing at Sutter Lake and with each other. Twenty-two-year-old Kennedy Charles has been in Sutter Lake for several, hoping that this is her chance for a blank page to begin writing the next phase of her life even as feelings of guilt for the sins of her father continue to weigh upon her. On the other hand, thirty-six-year-old security specialist Cain Hale is an even more recent new resident to the small town that his closest friends call home. A devastating loss had led him to be protective of his company and his privacy, resulting in a need to be in complete control of the world that revolves around him. But Cain never planned for someone like Kennedy, and she isn't the sort to easily divulge the deep, dark secrets that she's kept from everyone. She doesn't want him to get close, not when he's a reminder of every single thing she's left behind.

This series was one of those that simply kept getting better with each new release that the author came out with, and Beautifully Broken Control is certainly the best of the lot. Both Kennedy and Cain were trying to leave the far more devastating parts of their lives in the past by moving to Sutter Lake, and my heart broke for these two because what they experienced before were the sort that could truly destroy you. I liked that Cain and Kennedy were initially at odds because it just makes for a far more interesting turn-around in terms of their relationship. The element of suspense here was perfectly weaved into the story, and when the villain was revealed, I already had a feeling it was who it turned out to be, but ugh, talk about heartrending. I loved seeing the growth of Kennedy and Cain as individuals as much as I did seeing their relationship evolve and realizing just how far they had come. We also have the couple from the first three previous Sutter Lake novels, and everything tied together, coming in a full circle moment of sorts, which is yet another reason Beautifully Broken Control was a five-star read. ♥