Review: Close to Me by Monica Murphy (The Callahans #1) 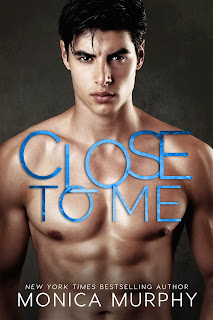 Monica Murphy launches her new series, The Callahans, which I believe is a spin-off of the author's highly popular One Week Girlfriend series, with Close to Me. This series starter finds the daughter of Drew and Fable Callahan (from One Week Girlfriend, Second Chance Boyfriend, plus two novellas), Autumn, crossing paths with Asher Davis in their freshman year and their lives become forever tangled from then on. Theirs is a non-relationship that finds them taking one step forward and one giant leap back. Autumn feels as though Ash sees her as nothing more than an occasional blip on his radar. Maybe happily-ever-afters really are meant for fairy tales--and her parents--but no matter how many times Autumn reminds herself that she and Ash aren't meant to be, she willingly offers up her heart, knowing all too well that he'll break it yet again. Then something happens during their senior year that draws them closer together. Could this be what leads the Asher and Autumn down a path that will have them going towards a shared future, or will they be yet another go around that'll turn out to be a dead end?

I've read quite a few of Monica Murphy's books in the past; alas, her One Week Girlfriend series has yet to cross my e-reader, although my youngest sister does have the paperbacks on her bookshelf, so this may turn out to be the perfect time for me to acquaint myself, at the very least, with the story of Drew Callahan and Fable Maguire. Maybe may lack of familiarity with the original cast of characters had me at a disadvantage because I wasn't as emotionally invested as those who already knew the family history. That doesn't mean, however, that I didn't enjoy the Autumn and Ash's story. As a matter of fact, I did, and my heart out went out to these two teenagers, Ash in particular because his home life certainly wasn't as positive as the one Autumn had. This book definitely satisfied my angst addiction, and the author, as always, knows how to grab and hold my attention from start to finish, with a story that packs a punch and then soothes it with the sort of ending that leaves you with a smile on your face and hopeful that we haven't seen the last of Ash and Autumn. Close to Me was a four-starred beginning to this series! ♥

Purchase Close to Me on Amazon | Apple Books | B&N | Kobo.