Review: See Through by Brittany Taylor 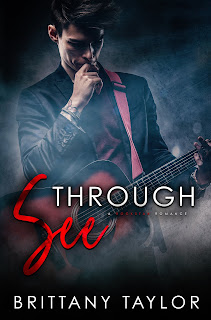 Brittany Taylor is a new-to-me author and my introduction to her writing turned out to be a seriously impressive one! See Through is a rock star romance, and with a trope as popular as this, stories are a dime a dozen. Taylor, however, gives this her own creative spin, thereby allowing readers to have a fresh and original story to sink their teeth into. We're introduced to Spencer Ryan, a rock star who has spent two years in the spotlight and knows just how much that glare can leave you feeling the burn of scrutiny and assumptions. With his reputation needing major buff-and-shine treatment, Spencer's management team insists on having a journalist follow him and his two band mates. Maybe an up close and personal view of who the real Spencer is behind the scenes will have the public seeing him in a whole new light, but that doesn't mean that Spencer is thrilled by the entire setup. He doesn't want anyone up in his business and then writing all about it, but he knows this may be what his career needs right now. The problem? The journalist is Lane Reynolds, the one woman who saw beyond Spencer's veneer.

This was a truly fantastic read, one that wasn't simply well-written but brought something new to an already overly crowded table and stood out on its own merits. Spencer and Lane were not your typical twenty-six-year-olds and I loved getting to know them. I have a thing for main characters who have far more depth to them than the norm, and these two met that particular criteria. There was a lot of push and pull going on, because even with all that darn chemistry that they'd already established from that first meeting, they were going above and beyond to pretend it didn't exist. This book was a rarity for me because I tend to like guessing whatever twists and turns may be waiting, but here, I simply sat back and let the book take its course. Trust me, it made for a wholly fascinating and engrossing read. If this book is a prime example of Brittany Taylor's writing, I've clearly been missing out, which means that I'm going to have to work my way through her back list. For right now, though, allow me to highly recommend See Through, and that's whether you love rock star romances or romances in general. Five stars. ♥

Purchase See Through on Amazon.