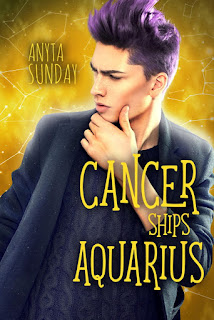 When I found out that Anyta Sunday had a new Signs of Love novel set for release this new year, I was tickled pink! This is, hands down, my favorite series from her, and for good reason. Cancer Ships Aquarius is the fifth and latest book, and it finds a twenty-eight-year-old manny, a thirty-seven-year-old single father, and a thirteen-year-old matchmaker on a private boat who stumble and fumble their way towards love and becoming a family. I'm happy to note that this book can, indeed, be read as a standalone without fear of feeling like you've missed some important plot point or bit of information. However, I'm highly recommending you read the other book simply based on the fact that they're totally amazing reads, especially if you have a thing for delicious slow burn romance.

Reid Glover has just gotten his heart broken yet again. He's sick and tired of being told "It's not you, it's me," a line that seems to be on a loop shared by his ex-girlfriends. With his latest relationship coming to an abrupt end, Reid not only needs a new job but a place to stay as well. So the position of a live-in male nanny sounds like the perfect thing. Except his would-be employer and ward--the British father-daughter that is Sullivan and Joanna Bell--happen to live on a boat. Reid doesn't do boats...but he desperately needs this job...and lo and behold, he gets it, thanks to some major shipping from Joanna. Sure, maybe his resumé was a wee bit padded and embellished. He's going to show his grumpy but gorgeous widower of a boss that he did the right thing by hiring him. Here's hoping Sullivan realizes that before temptation gets the better of him--the temptation being to kiss Reid or push him off the boat.

When Anyta Sunday promises you a slow burn romance, she more than lives up to that promise. Seriously, no one does this particular trope as well as Sunday does. Reid was a clueless wonder when it came to certain important aspects of Sullivan, but goodness, how adorable was he?! It took longer for Sullivan's layers to be peeled back, but once they were, I was helpless to falling for the guy as well. The banter between the two was entertainment fodder and with Joanna doing her bit to ship these two--as well as a few helpful allies--a happily-ever-after was inevitable for Sullivan and Reid. My heart went out to them as far as their back stories were concerned--Reid with his insecurities and feelings of rejection, and Sullivan with his grief over the loss of his spouse--and they deserved their HEA. That grand gesture with the audiobook was genius! There are only two star signs left--Libra and Sagittarius--and I'm kinda hoping Mason will be one of them. For now, go read Cancer Ships Aquarius, which garners five stars. ♥