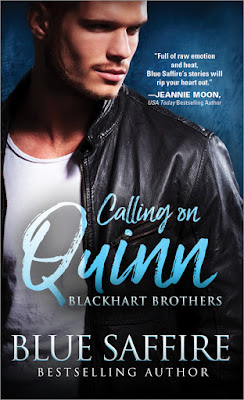 About Calling on Quinn
He's trouble—of the very best kind.

Quinn Blackheart is a private investigator, former cop, and no-nonsense, take-charge kind of guy who adores his sprawling Irish family. He likes to check all the boxes, and his niece's gorgeous driving instructor just earned a place at the top of his to-do list.

Alicia Rhodes has had a tough, chaotic year, and she's ready to put the past behind her and find happiness in the present. When handsome Quinn Blackhart shows up at a driving lesson, she can see he's the very best kind of trouble—but is she game? Now isn't a great time to get involved with a man—even if he's the most romantic, supportive, understanding, magnificent man she's ever met.

So between unfinished business of Alicia's, and a dangerous case threatening the Blackhart family, Quinn is determined to both woo Alicia and keep her safe—which is going to make for one wild, sexy ride.

Add Calling on Quinn on Goodreads.

An Excerpt from Calling on Quinn
Quinn
That lass does my head in. I don’t know how she can annoy the fuck out of me and turn me on so much I forget my own name at the same time. My body wants to go after her, but my mind is telling me to stay put.

My brothers and I have been on rotation to watch over Erin. Ma and Da left a while ago so Ma could shower in her own home and spend time with the babes. Kasey and Molly need their grandma. All of this is a big adjustment for the family. I think we’re all exhausted.

I can’t say the last time my mum didn’t stay overnight here at the hospital, with my da right by her side. I was happy to sit in while they take some time away. However, now my jaw ticks as I watch the swaying hips of the woman who’s been on my mind for a week.

I need to talk to her. That call went all wrong the other night. I’ll be the first to admit that I’m nothing but awkward when it comes to dating. Still, that woman made it a hell of a lot harder to try to ask her out.

I twist my lips into a frown as I watch her walk away. Trenton walks past her in the hallway, turning his head to watch her go by. I release a growl, feeling possessive and irritated.

“Now, that’s a looker.” He whistles when he enters the room.

“Wait, what?” he calls after me, but I’m already in motion.

My long legs eat up the floor as I head in the direction Alicia retreated in. I have her in sight as the elevator arrives. She steps in and the doors go to shut. I get there just in time to stick my foot in the way of them closing.

The lift makes a dinging sound as it opens wide. Alicia looks up from her phone as I step on. Our eyes lock and I close the distance between us. She drops her head down shyly to break the connection. She has to feel the same thing I feel. This energy that’s charging the tight space between us has a pulse.

The elevator chimes and others begin to crowd on, causing us to move closer together. Alicia tries to take a step back, but my hand shoots out. It lands protectively on her waist, drawing her into me to shield her.

I trap a groan between my lips when her soft curves press against me. She still won’t look up at me, but she doesn’t wiggle out of my hold either. She feels so right this close.

I dip my head to whisper in her ear, “We need to talk.”

She lifts her head to look at me, her lush lips are parted, begging me to kiss them. I’m this close to listening. The lift stops again, allowing more passengers onto the car.

Alicia places her hands on my chest as we’re squished more closely. The look in her eyes tells me I’m not alone in this. She indeed feels it too.

When we reach the lobby, the crowd starts to exit. I maneuver her body in front of mine to cover her as I lead her out. She relaxes into my hold on her waist, causing me to have hope that this won’t be a fight.

As soon as we get off the car, my newfound confidence implodes. A stony-faced Kevin is standing outside the elevator. When he turns his eyes to me, I know my talk with Alicia is going to have to wait.

“I should be going anyway,” Alicia rushes out.

She tries to take off, but I wrap my fingers around her forearm to stop her forward motion. She turns to look back at me. I grind my teeth against the electric current that zaps straight up my arm.

“This isn’t over. We’ll be having that talk,” I say before releasing her.

“Not such a good idea, but it was nice seeing you again. I’ll keep Erin in my prayers,” she replies softly.

About Blue Saffire
As a young girl, Blue Saffire’s mother introduced her to the world of love and music through movies, but once she got her hands on books, an author was born. With more than thirty contemporary romance novels and novellas under her belt, she’s now an award-winning, bestselling author. She lives with her husband on Long Island.