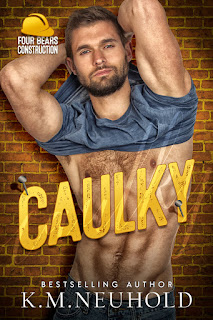 This book was exactly what I needed to kick off my weekend! K.M. Neuhold launches her new Four Bears Construction series with Caulky, a read which was both sweet and steamy. Forty-two-year-old Cole Williams is one of the four owners of Four Bears Construction, and he's never been one to commit to any sort of personal relationship. He's more than happy keeping things casual with hook-ups and one-night stands, although he's done the whole fuck buddies scenario in the past. Then thirty-five-year-old bee hobbyist and technical writer Ren (whose last name I can't recall seeing, but if you know what it is, feel free to let me know via the comments section!) comes along. It was supposed to be a one-time thing...that turned into a second encounter...and then a third. Ren know all too well what it's like to be the one left behind in a relationship, so hooking up with Cole was meant to be his rebound. But then it's beginning to feel like more. He could be inviting heartbreak yet again with his hot contractor, but getting chummy online with CaulkyAF may not be as risk-free as Ren first thought it may be.

Caulky was a really cute story about two guys who weren't looking for anything more than a hook-up. I like that Cole didn't have an aversion to commitment; rather, he simply had yet to met any guy who triggered a desire withing him for more. There was no pussyfooting between him and Ren, openly communicating and putting their cards on the table. The whole "CaulkyAF" and "Rebound" online personas were an endearing twist and highlight that sometimes, anonymity allows us to be more open than we would be in face-to-face encounters. While the developments in their relationship may seem quick, it wasn't as if these two fell in love within minutes of meeting, so this wasn't a case of insta-anything. I enjoyed the heck out of reading this book, and I think that it serves as a really strong start to the Four Bears Construction series. We get bits of the three other guys in the business--Ollie, Stone, and Everett--as well as Ren's best friend, Daniel, all of whom I'm guessing we'll be seeing more of as this new series progresses. I'm awarding Caulky 4.5 stars out of five stars and have high hopes for the rest of the series. ♥