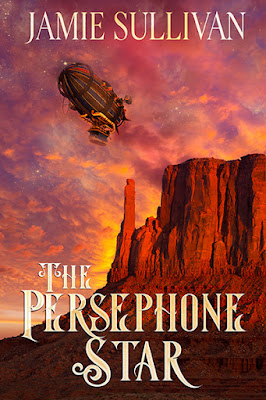 About The Persephone Star
Love looks different from a thousand feet up.

Postmistress Penelope Moser has recently settled with her father in the Wild West town of Fortuna. Shocked by the violence around her and the depressing lives of the town’s women, she throws herself into her job. She’s determined to make the best of it before she has to marry the odious town sheriff.

But when the Persephone Star is spotted in the territory, danger literally hits close to home. Its captain—the famed outlaw Mirage Currier—is fresh out of prison and gunning for revenge on Penelope’s fiancé for locking her up and sentencing her sister to death. Penelope’s pleas to avoid violence are ignored, and a bloody showdown seems inevitable. That is, until Penelope is kidnapped and held hostage on the Star.

Shockingly, Penelope finds intrigue rather than danger in the air. Mirage’s reputation as a hardened criminal doesn’t fit with the Star’s vibrant young captain whose only goal is to save her sister from the gallows. With her sympathies shifting, Penelope must decide whether to remain loyal to her father and the man she promised to marry, or face an uncertain future with an enthralling outlaw.

Add The Persephone Star on Goodreads.

Jamie Sullivan has been writing for what feels like her entire life – her parents’ attic is full of notebooks brimming with early attempts at fiction. She's found her stride, however, in romance. She's happy experimenting with genre, and has written supernatural, science fiction, and realist stories.

Giveaway
To celebrate this release, one lucky person will win a $10 gift card to Riptide! Leave a comment with your contact info to enter the contest. Entries close at midnight, Eastern time, on February 15, 2020. Contest is NOT restricted to U.S. entries. For more chances to enter, follow the tour, and don’t forget to leave your contact info!